The Montmorency River is a tributary of North-East bank of St. Lawrence river, flowing in the administrative region of Capitale-Nationale, in the province of Quebec, Canada. The course of the river successively crosses the regional county municipality of:

It drains into the Saint Lawrence River, about 9 kilometres (5.6 mi) downstream from Quebec City. It is especially known for the impressive Montmorency Falls near its mouth. 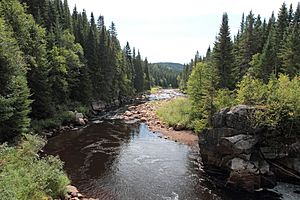 The Montmorency River flows from Lake Montmorency in a southerly direction through the undeveloped Canadian Shield of the Laurentides Wildlife Reserve. Reaching the northern part of the municipality of Château-Richer, it flows between high rocky cliffs that in some places are more than 600 metres (1,969 ft) high. Thereafter, it passes through the municipalities of Sainte-Brigitte-de-Laval, Beauport, and Boischatel, where the course of the river is characterized by the presence of numerous rapids before plunging 83 metres (272 ft) over the Montmorency Falls.

The river's watershed basin is sparsely populated, 92% of it is forested and dotted with 424 lakes. The largest lake, with an area of 7.53 square kilometres (2.91 sq mi), is Lac des Neiges (English: Lake of Snow) which is the source of rivière des Neiges (English: River of Snow), Montmorency's largest tributary. Urban and agricultural land makes up only 2% and 1% of the basin respectively, and is mostly confined to a small section in the far south of the Saint Lawrence lowlands.

The municipalities and unorganized territories that cover the Montmorency basin are:

The larger tributaries of the Montmorency River are (downstream default sorting order):

Course of the Montmorency river

Intermediate course of the Montmorency river, downstream from the Rivière des Neiges (segment of 29.4 kilometres (18.3 mi))

The Montmorency River flows on the northwest bank of the Saint-Laurent River via the Île d'Orléans Channel. This confluence is located opposite the Île-d'Orléans Bridge and downstream from Old Quebec. 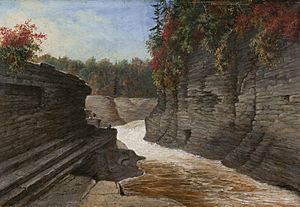 A painting of the Montmorency River, c. 1858

French colonization along the Montmorency River initially occurred at the mouth and falls only. The town of Boischatel was settled circa 1664.

In 1759, the Montmorency River formed a major obstacle to English General James Wolfe that prevented him from invading Quebec City from the east and subsequently forced him to scale the cliffs west of the city and battle the French on the Plains of Abraham. Remnants of an earthen fort built by Wolfe can still be found on the east side of the falls.

In the 19th century, colonization and logging of the interior really took off, and settlers came to the Sainte-Brigitte-de-Laval area in 1830. The river was used for log driving and its shores became industrialized when a hydro-electric dam and sawmill were built at the top and foot of the Montmorency Falls respectively. After the logging period ended, textile industry developed at the mouth of the river.

In 1992, the area surrounding the falls and mouth of the river was made into a park and developed for tourism with new viewing platforms, stairs, pedestrian bridge, aerial tram, restaurant, and visitor's centre.

The four most dominant fish species within the Montmorency basin are the rainbow trout, lake trout, Arctic char, and especially brook trout. Other species include the longnose sucker, white sucker, slimy sculpin, and pearl dace.

The explorer Samuel de Champlain named the fall located near the mouth of this watercourse "le grand saut de Montmorency" (English: "the big jump of Montmorency") on his map of 1608. Subsequently, the name of this fall attributed to the river. The map of Jean Bourdon, dated approximately 1641, indicates / Rivière Saut de Montmorency ". This toponymic designation evokes the memory of a member of the illustrious house of Montmorency, Charles de Montmorency (1537-1612), lord of Méru, Duke of Damville and admiral of France and Brittany, to whom Champlain had dedicated his exploration account of 1603.

The toponym "Montmorency river" was formalized on December 5, 1968 at the Commission de toponymie du Québec.

All content from Kiddle encyclopedia articles (including the article images and facts) can be freely used under Attribution-ShareAlike license, unless stated otherwise. Cite this article:
Montmorency River Facts for Kids. Kiddle Encyclopedia.