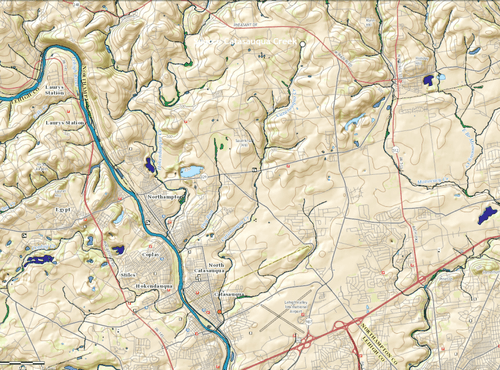 The local drainage networks shows the streams and their floodplains draining mainly away from the Blue Mountain Ridgeline to the north through Moore Township and surrounding communities. The township is divided by the E-W run of Pennsylvania Route 248 and its streets receive mail from postal addresses based on ‹See Tfd›Bath.

According to the United States Census Bureau, the township has a total area of 37.5 square miles (97 km2), of which 37.5 square miles (97 km2) is land and 0.04 square miles (0.10 km2), or 0.08%, is water. Geophysically, it is located within the great bend or kink of the lower Lehigh River mouth region due north of the cities of ‹See Tfd›Allentown, NNW of ‹See Tfd›Bethlehem and due west of Easton, Pennsylvania (on the mouth of the Lehigh). Moore Twp. contains one riverine drainage divide such that to the west it is drained into the Delaware River via historic Catasauqua Creek, Monocacy and especially Hokendauqua creeks, all of which originate in the township and are tributaries of the Lehigh River, and by the south and east draining Bushkill Creek tributary of the Delaware River (upper right corner of map above and right). Its landscapes compose the foothills south of its natural northern boundary — the over 150 miles (240 km) long Blue Mountain barrier ridge.

There were 3,303 households, out of which 30.3% had children under the age of 18 living with them, 68.1% were married couples living together, 6.1% had a female householder with no husband present, and 22.5% were non-families. 18.3% of all households were made up of individuals, and 8.5% had someone living alone who was 65 years of age or older. The average household size was 2.62 and the average family size was 2.97.

The township is served by the Northampton Area School District.

All content from Kiddle encyclopedia articles (including the article images and facts) can be freely used under Attribution-ShareAlike license, unless stated otherwise. Cite this article:
Moore Township, Northampton County, Pennsylvania Facts for Kids. Kiddle Encyclopedia.