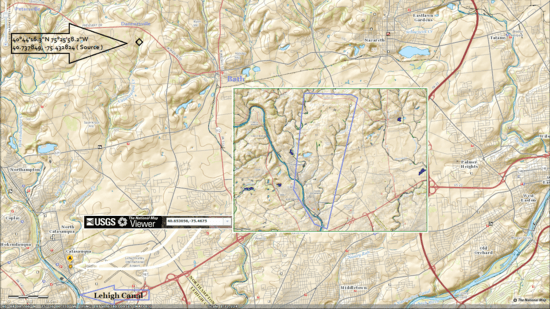 Overall view of region showing insert with relation relative to the Lehigh Canal and River.

Catasauqua Creek is an ENE–SSW oriented creek draining 6.6 miles (10.6 km) (straight line distance) from springs of the Blue Mountain barrier ridge several miles below the Lehigh Gap in the ridge-and-valley Appalachians located upriver & opposite from Allentown in Lehigh and Northampton counties in Pennsylvania.

The mouth of the creek outlets directly opposite West Catasauqua, Pennsylvania just below the Race Street bridge across the Lehigh, the latest of the several successor structures built to replace the original wooden bridge built in 1839-1840 to carry heavy wagons of iron ore to the new furnaces being built within the new village aborning as the Lehigh Crane Iron Company created the infrastructure to father the iron and steel industry of the Lehigh Valley. The head of the Creek begins in the Dannersville neighborhood of Bath at 40°44′16″N latitude 75°25′58″W longitude (or 40.737849,-75.432824) forming a steep sided ravine almost immediately as it gathers waters over its first mile. By the time it passes Sauerkraut Hill its gathered two major tributary creeks and is leaving steeper terrain for a gentler run over the last four miles or so remaining to its mouth.

Catasauqua Creek was the water course along which six of the first eight successful anthracite fueled iron smelting hot blast furnaces in North America were erected for it was chosen in 1839 as a mill stream by Erskine Hazard & Josiah White, co-founders of the Lehigh Coal & Navigation Company, along which to establish their new subsidiary: the Lehigh Crane Iron Company with imported Welsh expert David Thomas as superintendent to construct and operate blast furnaces. The area first appears in the historical record as a manorial deed in Penns times, but a surnames analysis by [TBDL-author of History of Northampton County] in his 1877 history of Northampton County shows the area was first settled by Irish emigrants (late 1600s–early 1700s) who became bought out by descendants of German extraction.

By late 1839, the creek was reshaped to begin providing water power for producing the first North American pig iron using anthracite as the principle fuel, a new breakthrough product, anthracite iron — that in conjunction with the new wonder fuel, anthracite (which began pouring down the Lehigh Canal in 1820), effectively boot strapped the American Industrial Revolution. The first successful anthracite blow and cast of iron occurred there on July, 4th 1840 about which Bartholomew & Metz note:

From that moment on, anthracite and the canals pivotal importance in the industrial development of the United States.

Using anthracite as fuel in its production, iron for the first time became plentiful and inexpensive. For a period of thirty years, three decades that shaped the future of the valley, anthracite fueled furnaces throughout the Lehigh Valley produced greater quantities of iron than any other part of the nation.

Catasauqua creek is a left bank tributary entering from the East shore of the historic Lehigh River/Canal and is often known as the "catty creek".

Over the years, the occupants of Catasauqua underwent a great deal of change, with initial settlers shown to be Irish, while by the 1810s the population was mainly of German descent. This may account for the variety of alternative names of the creek.

Variant Names registered by the [USGS GNIS system for this watercourse ]:

The USGS co-ordinate data "40.7377778, -75.4336111" (Lat 40° 44' 16" N. & Lng 075° 26' 01" W.) when entered into www.google.com/map/place search box puts the stream's source in Northampton, PA approximately 2,052 feet (625 m) south of Pheasant Drive, county road 248, (in the dell between Hilltop Rd and Sickle Rd., ~3,530 feet (1,080 m) north of their junction.
Its origin is near Miller State Pond in East Allen Township, Northampton County, Pennsylvania. It flows through Allen Township, Northampton County, Pennsylvania, North Catasauqua and finally, into Catasauqua, Pennsylvania where it flowed into the Lehigh Canal & River. Along its course it passes Catasauqua High School and flows through Willowbrook Golf Course in North Catasauqua and through Catasauqua Park.

All content from Kiddle encyclopedia articles (including the article images and facts) can be freely used under Attribution-ShareAlike license, unless stated otherwise. Cite this article:
Catasauqua Creek Facts for Kids. Kiddle Encyclopedia.