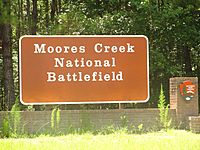 Moores Creek National Battlefield is a United States National Battlefield managed by the National Park Service. The park commemorates the 1776 victory by a thousand Patriots over about eight hundred Loyalists at the Battle of Moore's Creek Bridge. The battle dashed the hopes of Royal Governor Josiah Martin of the Province of North Carolina for regaining control of the colony for the British crown. The Loyalist defeat ended British plans for an invasionary force to land in Brunswick Town, North Carolina. North Carolina voted to declare independence from the British on April 12, 1776, shortly after the victory at Moore's Creek, which is located in the Wilmington area near Currie in Pender County in southeastern North Carolina. The park was established as a National Military Park on June 2, 1926 and was redesignated as a National Battlefield on September 8, 1980. 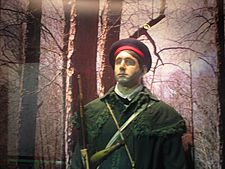 Reproduction of a Scottish Highlander soldier at Moores Creek Battlefield 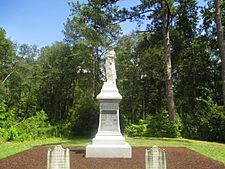 Loyalists, mostly Scottish Highlanders, many of whom did not have muskets and were wielding broadswords, expected to find only a small Patriot force on February 27, 1776. Before the arrival of the Loyalists, the Patriots removed the planks from the bridge that crossed Moore's Creek. After removing the planks of wood, they smeared the remaining crossing beams with lard. This forced the Loyalists to cross the bridge in single file. As the Loyalists advanced across the bridge, Patriot shots rang out and dozens of Loyalists fell into the creek below, including their commanders. At the time, the creek was an estimated six feet deep. One commander, Lieutenant Colonel Donald McLeod, died in the battle. Another commander was Colonel Allan MacDonald, the husband of Flora MacDonald of Highland lore who aided Bonnie Prince Charlie following the Jacobite defeat at Culloden Moor in 1746.

Stunned, outgunned and leaderless, the Loyalists either surrendered or retreated in confusion. Wagons, weapons and British Pound sterling worth more than $1 million by today's value were seized by the Patriots in the days following the battle.

This dramatic victory ended British authority in the colony and greatly influenced North Carolina to be the first colony to vote for independence. The Battle of Moores Creek Bridge, coupled with the Battle of Sullivan's Island near Charleston, South Carolina, a few months later, were the first open conflicts of the American Revolution. Both ultimately led the Thirteen Colonies to declare independence on July 4, 1776. 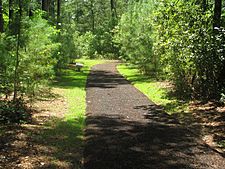 A padded trail covers most of Moores Creek National Battlefield and an extension known as the "Tarhill Trail" in a forested area known for tar production. 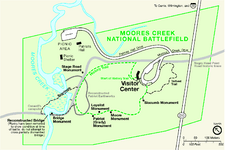 The central Moores Creek most likely was named in honor of Elizabeth Moore, a pioneer settler.

Throughout the park, there are remnants of the 1776 road traveled by Patriot and Loyalist forces. A 1-mile (1.6-km) trail with wayside exhibits leads through the battlefield and across Moores Creek. The historic bridge site is located along the trail.

The park, located in a rural area, offers a visitor center with exhibits and audio-visual program, a 0.3-mile (500 m) colonial forest trail, and a picnic area.

All content from Kiddle encyclopedia articles (including the article images and facts) can be freely used under Attribution-ShareAlike license, unless stated otherwise. Cite this article:
Moores Creek National Battlefield Facts for Kids. Kiddle Encyclopedia.