The Morgan Morgan Monument, also known as Morgan Park, is a 1.05-acre (0.4 ha) roadside park in the unincorporated town of Bunker Hill in Berkeley County, West Virginia. It is located along Winchester Avenue (U.S. Route 11) and Mill Creek. The park features a granite monument that was erected in 1924 to memorialize Morgan Morgan (1688–1766), an American pioneer of Welsh descent, who was among the earliest European persons to settle permanently within the present-day boundaries of West Virginia.

The West Virginia Legislature appropriated funds for the construction of the Morgan Morgan Monument in 1923. West Virginia Governor and Morgan descendant Ephraim F. Morgan appointed and oversaw a committee of three people to plan and supervise the monument's construction: Haze Morgan, another Morgan descendant and the commission's chairperson; Blanche M. Pickering (Mrs. A. A. Pickering) of Rowlesburg; and West Virginia State Senator Harry P. Henshaw of Bunker Hill. A dedication and unveiling ceremony was held for the monument on September 13, 1924, and Governor Morgan served as the principal speaker.

The monument is situated within the unincorporated town of Bunker Hill in Berkeley County, West Virginia. The monument's park is bound to its west by Winchester Avenue (U.S. Route 11) and the route's bridge over Mill Creek, to its north by a filling station parking lot, to its east by a gravel parking area, and to its south by Mill Creek, which flows from west to east into Opequon Creek. Several springs lie to the south of the monument along the southern edge of Mill Creek. The Morgan Morgan Monument is located 9.6 miles (15 km) southwest of Martinsburg and 11.9 miles (19 km) northeast of Winchester, Virginia; it is 3,256 feet (992 m) east of the Inwood Quarry.

The Morgan Morgan Monument lies within the Mill Creek Historic District near several Morgan family properties in the Bunker Hill and Gerrardstown areas listed on the National Register of Historic Places (NRHP). It is situated 1,279 feet (390 m) to the northeast of the interment sites of Morgan Morgan and the Morgan family at the Morgan Chapel and Graveyard on Runnymeade Road (West Virginia Secondary Route 26). Morgan's son David built a structure that became part of the Morgan-Gold House, which is 1.3 miles (2 km) west of the monument. The William G. Morgan House (site of Morgan Acres and Morgan's first crude shelter) is 2.4 miles (4 km) west of the monument. Cool Spring Farm, the home of Morgan's son Zackquill Morgan and the site of Morgan Cabin, is located 2.7 miles (4 km) to the west of the monument.

The monument memorializes Morgan Morgan (1688–1766), an American pioneer of Welsh descent who was among the earliest Europeans to settle permanently within the boundaries of the present-day U.S. state of West Virginia.

The Mill Creek watershed and the land upon which the Morgan Morgan Monument is located were originally part of the Northern Neck Proprietary, a land grant that the exiled Charles II, King of England, awarded to seven of his supporters in 1649 during the English Interregnum. Following the Restoration in 1660, Charles II finally ascended to the English throne. Charles II renewed the Northern Neck Proprietary grant in 1662, revised it in 1669, and again renewed the original grant favoring original grantee Thomas Colepeper, 2nd Baron Colepeper, and Henry Bennet, 1st Earl of Arlington, in 1672. In 1681 Bennet sold his share to Lord Colepeper, who received a new charter for the entire land grant from James II, King of England, in 1688. Following the deaths of Lord Colepeper, his wife Margaret, and his daughter Katherine, the Northern Neck Proprietary passed to Katherine's son Thomas Fairfax, 6th Lord Fairfax of Cameron, in 1719.

Morgan Morgan arrived in the Bunker Hill area circa 1731 when it was still a part of Spotsylvania County, and he was given a 1,000-acre (405 ha) land grant of the Northern Neck Proprietary's land on December 12, 1735. Morgan was believed to have been the first European to permanently settle in present-day West Virginia; however, German settlers may have inhabited Shepherdstown as early as 1727. Morgan became active in local governance, and was appointed a justice of the peace for Spotsylvania County by the Virginia Governor's Council on April 23, 1734. Orange County was created from Spotsylvania in late 1734, and Morgan continued on as a justice of the peace for the new county. In January 1735 when the Orange County Court first convened, Morgan served on its new commission of the peace. Morgan also served as captain of the Orange County militia. He worked to develop the region's road network and infrastructure, and is credited with developing and overseeing the construction of a route between Bunker Hill and Winchester. Morgan also operated an ordinary on his property. 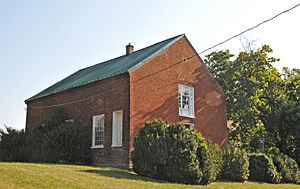 Morgan was instrumental in helping to create Frederick County from Orange County in 1738. Morgan served as a justice of the peace on the Frederick County Court's commission of the peace when it was convened in 1743. Morgan also served as a vestryman of the Frederick Parish of the Anglican Church. Around 1740 he established present-day West Virginia's first Anglican Communion church along with settlers John Briscoe and Jacob Hite. The church was originally built as a log structure known as Morgan's Chapel, and after its reconstruction in 1851, it became known as Christ Episcopal Church. Morgan Morgan and his family are interred in the church's adjoining cemetery. After Morgan's death, Berkeley County was created in 1772 from the northern third of Frederick County.

Morgan's original log cabin was constructed between 1731 and 1734. This structure was rebuilt and restored with many of its original logs in 1976 as a West Virginia and Berkeley County Bicentennial Project. Wood siding was added to the cabin's exterior in 1994 to protect the original logs. Known as the Morgan Cabin, it is located on the Cool Spring Farm property 2.74 miles (4 km) west of the monument and Bunker Hill. Morgan Cabin, Cool Spring Farm, and the surrounding 104 acres (42 ha) are owned by the Berkeley County Historical Landmarks Association and managed by a special committee of the association.

During its 1923 legislative session, the West Virginia Legislature passed a bill (introduced by West Virginia State Senator Harry P. Henshaw of Bunker Hill) appropriating $5,000 toward a monument memorializing Morgan Morgan in Bunker Hill. The bill was approved by West Virginia Governor Ephraim F. Morgan, a direct descendant of Morgan. The bill stated that Morgan Morgan was "a man of high character who, by his efforts and example, was largely useful in the community of which he was the founder". It also proclaimed that the monument to Morgan would "commemorate his life and deeds". Half of the bill's appropriation was disbursed in 1924, and the other half was disbursed later in 1925. The monument was to be located at or near Morgan's burial site at Morgan Chapel. The bill stipulated that the monument would be planned and supervised by the Morgan Morgan Monument Commission, which was to consist of three members appointed by the Governor, who was to oversee the commission. On the morning of January 2, 1924, Governor Morgan appointed the committee, which consisted of Haze Morgan, another direct descendant of Morgan and the commission's chairperson; Blanche M. Pickering (Mrs. A. A. Pickering) of Rowlesburg; and West Virginia State Senator Harry P. Henshaw of Bunker Hill. The commission purchased a 1.05-acre (0.4 ha) lot for $420 for the construction of the monument in Bunker Hill. 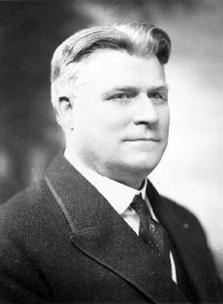 The roadside park was occasionally utilized by local organizations for the hosting of events, including by the Rest Church of nearby Rest, Virginia.

In 1925 the Legislature established the State Forest, Park and Conservation Commission to study and investigate the opportunities and needs for forests, parks, game preserves, and recreational areas in West Virginia. In 1927 the Commission provided its recommendations to the Legislature, which included a recommendation for a State Monument System. In its list of extant historical monuments to be included in this system, the Commission named the Grave Creek Mound in Moundsville, the Point Pleasant Monument (now Tu-Endie-Wei) in Point Pleasant, the James Rumsey Monument in nearby Shepherdstown, the Cadell Rifle Range in Preston County, and the Morgan Morgan Monument.

The Morgan Morgan Monument consists of a tall granite stone from Barre, Vermont, atop a concrete foundation. The monument measures 12.5 feet (4 m) in total height. A 10-inch (25 cm) medallion of the Seal of West Virginia is affixed to the top of the monument's main (western) façade, over two indented lines within the stone. The following inscription is etched into the stone below the seal: "COL. MORGAN MORGAN NOV. 1, 1688 – NOV. 17, 1766". Below the inscription is a plaque that reads:

ERECTED BY THE STATE OF WEST VIRGINIA

In commemoration of the first settlement within the present boundaries of said State, which was made by Col. Morgan Morgan, a native of Wales, and Catherine Garretson, his wife, in the year 1726 on a tract of 1000 acres about 2 miles west of here.

Granted to him by colonial Virginia patent, and in recognition of the sterling character of the said Morgan and family who by their efforts and example, were largely useful in the community of which he was the founder and had great influence for good upon the early history of the territory now constituting this State. His grave (marked) is nearby, adjacent Christ's Episcopal Church formerly called Morgan's Chapel, the oldest church in this State, which he helped organize and build.

All content from Kiddle encyclopedia articles (including the article images and facts) can be freely used under Attribution-ShareAlike license, unless stated otherwise. Cite this article:
Morgan Morgan Monument Facts for Kids. Kiddle Encyclopedia.