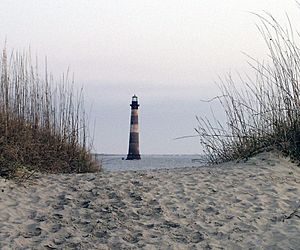 Morris Island is an 840-acre (3.4 km²) uninhabited island in Charleston Harbor in South Carolina, accessible only by boat. The island lies in the outer reaches of the harbor and was thus a strategic location in the American Civil War. The island is part of the cities of Charleston and Folly Beach, in Charleston County.

Morris Island was heavily fortified to defend Charleston harbor, with the fortifications centered on Fort Wagner. It was the scene of heavy fighting during the Union Army's campaign to capture Charleston, and is perhaps best known today as the scene of the ill-fated assault by the 54th Massachusetts Volunteer Infantry, an African-American regiment. The regiment and this assault, where it suffered over 50% casualties, was immortalized in the film Glory.

After the Confederates abandoned Morris Island in 1863 the Union occupied it. In the next yearthey transferred 600 Confederate officers from Fort Delaware to Morris Island; 50 of whom were quickly exchanged. The others were utilized as Human Shields in an attempt to silence the Confederate artillery at Fort Sumter; in reaction to what the Confederacy did with POWs in Charleston to deter Union ships from firing on the city. None of these men were killed by artillery fire though several died of sickness. They soon became known in the South as the Immortal Six Hundred.

Land erosion has destroyed a great deal of the old fortifications on the island, including some parts of Fort Wagner. 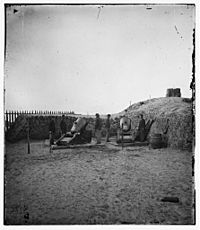 Morris Island is also the site of the Morris Island Light, a lighthouse that stands on the southern side of the entrance to Charleston Harbor, north of the town of Folly Beach.

Plans to commercially develop the 125 acres (506,000 m²) of high ground on the northern tip of Morris Island as a luxury residential area resulted in several groups fighting to have the island declared a national historical park or added to the Fort Sumter park.

In January 2005, Charleston developer Harry Huffman, listed the 125 acres (0.51 km2) for sale on eBay for $12.5 million. Huffman was in negotiations to sell the island to a consortium of preservation groups, but claimed to have listed the island to see if there was any other interest. Charleston zoning regulations permit no more than 5 homes to be built on the island.

On February 2, 2006, the Trust for Public Land (TPL), a non-profit private land conservation organization, announced the purchase of Morris Island for $4.5 million. Ginn Resorts had previously purchased the island for a reported $6.5 million. In May 2008, TPL and partners (including the South Carolina Conservation Bank, the South Carolina State Ports Authority, the Civil War Preservation Trust, and many private donors) purchased the island on behalf of the City of Charleston from Ginn Resorts for $3 million. According to TPL, the city and county are working "to complete a management plan to protect the island's nationally significant historical and natural resources."

All content from Kiddle encyclopedia articles (including the article images and facts) can be freely used under Attribution-ShareAlike license, unless stated otherwise. Cite this article:
Morris Island Facts for Kids. Kiddle Encyclopedia.