Mount Gandalf is a 2,391-metre (7,844-foot) mountain summit located in the Cadwallader Range in southwestern British Columbia, Canada. It is situated at the northeast corner of Birkenhead Lake Provincial Park, 35 km (22 mi) north of Pemberton, 56 km (35 mi) west of Lillooet, 2.9 km (2 mi) north of Tolkien Peak, and immediately south of Mount Aragorn, which is its nearest higher peak. Precipitation runoff from the peak drains into tributaries of the Fraser River.

The first ascent of the mountain was made on May 8, 1972, by Peter Jordan, Fred Thiessen, and Eric White. This climbing party also made the first ascents of nearby Mount Aragorn and Mount Shadowfax. The names for Mounts Aragorn, Gandalf, and Shadowfax were taken from fictional characters in the novels The Hobbit and The Lord of the Rings by J. R. R. Tolkien, which were read while waiting out stormy weather during the 1972 outing. However, Mount Gandalf became incorrectly identified on maps as Shadowfax, and vice versa, as originally proposed in 1978 by Karl Ricker of the Alpine Club of Canada. The mountains' names were corrected as recommended in March 2006 by Scott Nelson and endorsed by the BC Mountaineering Club. The correction was officially adopted December 4, 2006, by the Geographical Names Board of Canada.

Based on the Köppen climate classification, Mount Gandalf is located in a subarctic climate zone of western North America. Most weather fronts originate in the Pacific Ocean, and travel east toward the Coast Mountains where they are forced upward by the range (Orographic lift), causing them to drop their moisture in the form of rain or snowfall. As a result, the Coast Mountains experience high precipitation, especially during the winter months in the form of snowfall. Temperatures can drop below −20 °C with wind chill factors below −30 °C. The months July through September offer the most favorable weather for climbing Mount Gandalf. 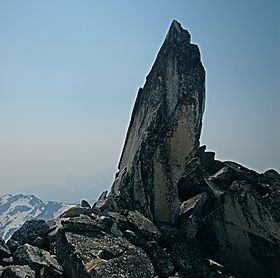 The granite spire that is the summit of Gandalf 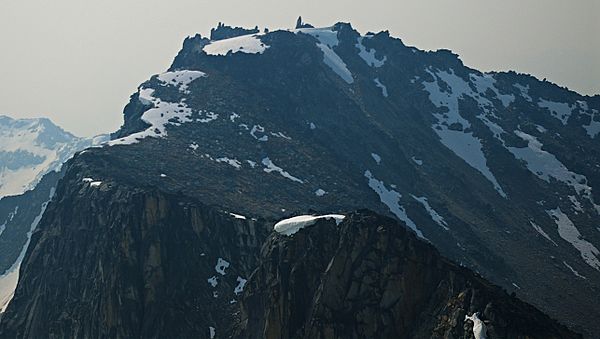 All content from Kiddle encyclopedia articles (including the article images and facts) can be freely used under Attribution-ShareAlike license, unless stated otherwise. Cite this article:
Mount Gandalf Facts for Kids. Kiddle Encyclopedia.