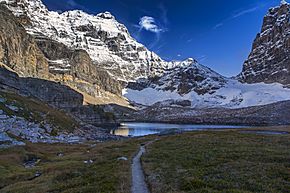 Mount Hungabee, officially Hungabee Mountain, is a mountain located on the boundaries of Banff National Park and Yoho National Park on the Continental Divide at the head of Paradise Valley. The peak was named in 1894 by Samuel Allen after the Stoney Indian (also known as Nakoda) word for "chieftain" as the mountain is higher than its neighbouring peaks. The mountain can be seen from the Icefields Parkway (#93) in the upper Bow Valley.

Mt. Hungabee was first climbed in 1903 by H.C. Parker who was guided by Hans Kaufmann and Christian Kaufmann.

The normal climbing route is via the west ridge (III 5.4) which features route finding challenges. Early summer is not recommended due to avalanche hazard from snow on the NW face.

Based on the Köppen climate classification, Mount Hungabee is located in a subarctic climate with cold, snowy winters, and mild summers. Temperatures can drop below −20 C with wind chill factors below −30 C.

All content from Kiddle encyclopedia articles (including the article images and facts) can be freely used under Attribution-ShareAlike license, unless stated otherwise. Cite this article:
Mount Hungabee Facts for Kids. Kiddle Encyclopedia.