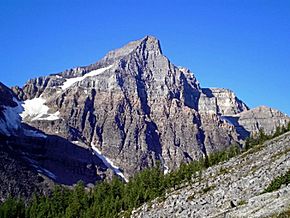 The Bow Range is a mountain range of the Canadian Rockies in Alberta and British Columbia, Canada. The range is named in associated with the Bow River and was officially adopted on March 31, 1917 by the Geographic Board of Canada.

The Bow Range covers a surface area of 717 km² (277 mi²), has a length of 34 km (from north to south) and a maximum width of 43 km. The highest peak is Mount Temple, with an elevation of 3,543 m (11,624 ft). The range also covers the Valley of the Ten Peaks, with the tallest of the ten being Mount Hungabee at 3492 metres. The range also has hiking areas such as the Consolation Lakes, Sentinel Pass-Larch Valley, Wenkchenma Pass-Eiffel Lake, the Beehive plain of the Six Glaciers system and Saddle Back Pass.

All content from Kiddle encyclopedia articles (including the article images and facts) can be freely used under Attribution-ShareAlike license, unless stated otherwise. Cite this article:
Bow Range Facts for Kids. Kiddle Encyclopedia.