Mount Lefroy is a mountain on the Continental Divide, at the border of Alberta and British Columbia in western Canada. The mountain is located on the eastern side of Abbot Pass which separates Lake Louise in Banff National Park from Lake O'Hara in Yoho National Park. Mount Victoria lies immediately on the western side of the pass.

The mountain is the site of the first fatal climbing accident in Canada. In 1896 during a failed summit bid, Philip Stanley Abbot slipped on rocks after just coming off an icy section and plummeted down the rock face to his death.

A prominent painting by Canadian Group of 7 artist Lawren Harris, was painted at this site. 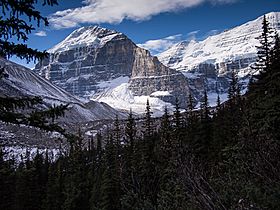 Based on the Köppen climate classification, Mount Lefroy is located in a subarctic climate with cold, snowy winters, and mild summers. Temperatures can drop below −20 °C with wind chill factors below −30 °C. 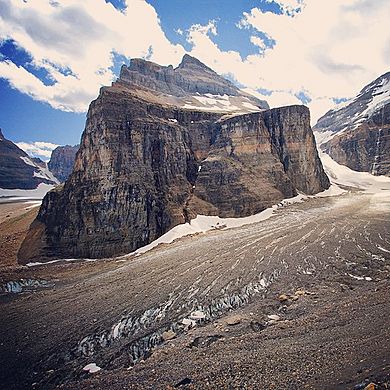 All content from Kiddle encyclopedia articles (including the article images and facts) can be freely used under Attribution-ShareAlike license, unless stated otherwise. Cite this article:
Mount Lefroy Facts for Kids. Kiddle Encyclopedia.