Mount Romulus is a 2,832-metre (9,291-foot) mountain summit located in the Little Elbow River Valley of Kananaskis Country in the Canadian Rockies of Alberta, Canada. Weather permitting, the peak is visible from highways southwest of Calgary as it is recognizable by its signature band of snow that forms above the broad southeast cliffs. The mountain is named for Romulus, who along with his twin brother Remus were the mythological founders of Ancient Rome. Mount Remus (2688 m) is situated 2.0 km (1.2 mi) to the east-northeast. The name was officially adopted by the Geographical Names Board of Canada in 1940. Mount Romulus' nearest higher peak is Fisher Peak, 4.0 km (2.5 mi) to the northwest.

Based on the Köppen climate classification, Mount Romulus is located in a subarctic climate zone with cold, snowy winters, and mild summers. Temperatures can drop below −20 °C with wind chill factors below −30 °C. In terms of favorable weather, June through September are the best months to climb. Precipitation runoff from the mountain drains into the Little Elbow River, which is a tributary of the Elbow River. 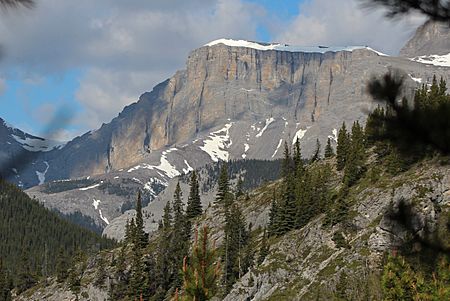 All content from Kiddle encyclopedia articles (including the article images and facts) can be freely used under Attribution-ShareAlike license, unless stated otherwise. Cite this article:
Mount Romulus Facts for Kids. Kiddle Encyclopedia.