Mount Seymour is a mountain located in Mount Seymour Provincial Park in the District of North Vancouver, British Columbia, Canada. It is a part of the North Shore Mountains, rising to the north from the shores of Burrard Inlet and Indian Arm to a summit of 1,449 m (4,754 ft) above the Indian River and Deep Cove neighbourhoods. Mount Seymour is most commonly identified for its ski area of the same name, and as a popular hiking area. It is named in honour of Frederick Seymour, second governor of the Colony of British Columbia. The name is used to refer to the ridge although the main summit is one of several, and is also known as Third Peak.

The mountain opened for skiing in 1938 under the ownership of the Swedish emigrant, Harald Enqvist, with a cafeteria and ski rental. A few years later, in 1949, the Government of British Columbia bought the ski area. The Government did not have the experience to run a ski area, so, they issued Mr. Enqvist the first Park Use Permit to operate the area. When the permit expired in 1951, the government found a concessionaire, who was put in charge of running the lifts, ski school and cafeteria. The name Enqvist was later spelled Enquist giving name to "The Enquist Lodge" and "Enquist Tube Park" among other facilities. The government retained overall ownership until 1984, when it privatized its operation as part of a cost-cutting measure.

The ski area has been run by the Wood family since 1984. They installed the Lodge chairlift in 1986 and the Brockton chairlift in the early 1990s. Starting in the 2010s, the mountain has been more aggressively upgraded. The original Mystery Peak chairlift was removed in 2012 and replaced with a high-speed quad, while the Goldie rope tow was replaced with a magic carpet. 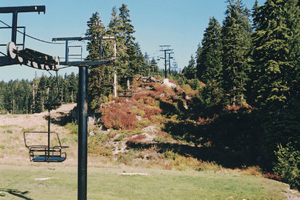 On January 19, 2014, Tim Jones died while coming down from the North Shore Rescue team cabin on Mount Seymour. Tim had saved many lives on the mountain over the years. Shortly after his passing a community movement was formed to name the yet unnamed Second Peak of Seymour after him. This movement has gained a lot of traction in the community and has resulted in Bivouac.com changing the name on their mountain database.

The Mount Seymour ski area has four lifts, the Mystery Peak Express high-speed quad chairlift, Brockton and Lodge double chairlifts, and the Goldie Lake covered magic carpet. Another double chairlift, the Ridge Chair, was destroyed in a windstorm in 1998, and is currently still standing, though gradually rotting away. Another beginner lift, the Goldie Ropetow was removed in 2011 replaced by the magic carpet. The area offers 330 m (1,083 ft) of vertical drop and about 1,000 cm (394 in) of annual snowfall. Skiing and snowboarding are available on 40 marked trails and many unmarked routes. The longest trail is 1.6 km (1 mi) long (Unicorn) and 18 of the trails have night lighting. Four additional terrain parks exist for freestyle activities. Terrain has also been developed for snowtubing and tobogganing.

Guided and unguided snowshoeing takes place on a separate 10 km (6 mi) network of maintained trails. Backcountry access for snowshoeing and camping is permitted.

Mount Seymour's Enquist Cabin, located in the Tube Park Parking Lot was destroyed in a fire in the late spring of 2005. The cabin was available for rental and was the home of the Mount Seymour Ski Club. This cabin has been rebuilt, and has been in operation since the beginning of the 2010/2011 season.

Due to its easy road access and ample parking lots, Mount Seymour is often used as a filming location. Films and TV series shot using its forests, snowy slopes and region-spanning vistas include:

All content from Kiddle encyclopedia articles (including the article images and facts) can be freely used under Attribution-ShareAlike license, unless stated otherwise. Cite this article:
Mount Seymour Facts for Kids. Kiddle Encyclopedia.