Mount Watatic is a 1,832-foot (558 m) monadnock located just south of the Massachusetts–New Hampshire border, in the United States, at the southern end of the Wapack Range of mountains. It lies within Ashburnham and Ashby, in Massachusetts, and New Ipswich, in New Hampshire; the 22 miles (35 km) Wapack Trail and the 92-mile (148 km) Midstate Trail both cross the mountain. The Yellow Arrow trail is 1.1 mile. Public parking for a half-hour (one way) hike to the summit is located on Massachusetts Route 119.

The name is probably a corruption of the Native American term Wetu-tick, "wigwam brook," and probably applied first to the nearby large stream and thereafter to the mountain and the pond.

Mount Watatic was the site of a ski area that operated from 1965 until 1984. An attempt to reopen the ski area in 1988 failed. The bald summit of the mountain featured a fire tower, open to the public, until its removal in 1996. 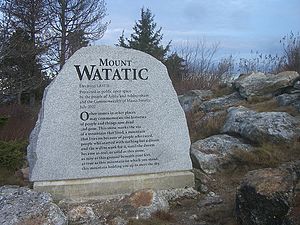 An engraved stone at the summit of Mount Watatic.

In 2000, the summit of the mountain was sold to Industrial Communications and Electronics for the development of a 150-foot (46 m) cellular telephone tower and a road to the summit. In 2002, prior to development of the communications tower, the mountain was purchased for $2,500,000 by the Ashby Land Trust, the Town of Ashby, the Ashburnham Conservation Trust, the Town of Ashburnham, Mass Dept of Fish and Wildlife and Mass Dept of Conservation and Recreation. Unfortunately by this point a road had already been blasted into the ski area (back) side of the mountain, making several of the still maintained ski trails unusable. The purchase resulted in the permanent protection of approximately 281 acres (1.14 km2) of the mountain, including the summit, as conservation land. In July 2010, Mount Watatic was named one of the "1000 Great Places in Massachusetts" by the State Commission of Massachusetts.

All content from Kiddle encyclopedia articles (including the article images and facts) can be freely used under Attribution-ShareAlike license, unless stated otherwise. Cite this article:
Mount Watatic Facts for Kids. Kiddle Encyclopedia.