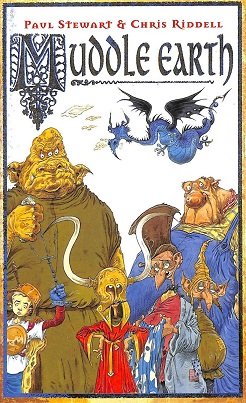 Muddle Earth is a children's novel by Paul Stewart, published in 2003, and illustrated by Chris Riddell. It is largely a parody of The Lord of the Rings by J. R. R. Tolkien. Like LOTR it is divided into three sections: Englebert the Enormous, Here Be Dragons and Doctor Cuddles of Giggle Glade. In 2011, a sequel titled Muddle Earth Too was published.

Joe Jefferson, a boy from the ordinary world (Earth), has been summoned to Muddle Earth, a medieval fantasy world "full of monsters, mayhem, and more", by the wizard Randalf. He is then exhorted as a "warrior-hero". In other words, he must fight evil on behalf of Randalf, who has in turn been contracted by the ruler of Muddle Earth, the Horned Baron. The Horned Baron, however, has problems that even Randalf cannot attend to: his wife Ingrid is a very demanding woman. This is a trait that the evil villain Doctor Cuddles pays heed to, and uses to his advantage in all three sections of the novel.

Similarities to The Lord of the Rings

Other people and places

In 2011 a sequel named Muddle Earth Too was published. It was also split into three parts, "Down with Stinkyhogs!", "The trouble with Big Sisters" and "Pesticide the Flower Fairy". It contains parody references from The Lord of the Rings, like its predecessor, but also throws in elements of Twilight, Harry Potter, The Lion, the Witch and the Wardrobe, A Midsummer Night's Dream, Hansel and Gretel, The Sword in the Stone, His Dark Materials and Sleeping Beauty. It follows Joe returning to Muddle Earth, through a wardrobe this time, with his big sister Ella (who made a minor appearance in Muddle Earth). He finds Randalf is now Headmaster of a new wizardry school named Stinkyhogs, built in the Horned Baron's castle after his retirement. They are competing against their rival school in the Muddle Earth annual game, Broomball, to win the Goblet of Porridge. But it has gone missing and Joe, Randalf, Ella and the others must go on a quest to find it. Along the way they meet the handsome Edward Gorgeous (Ella's love interest), the eccentric Lord Asbow, the peculiar Mr. Fluffy, the pompous Kings Edmund & Peter, the prissy Queens Susan & Lucy, and the ruthless, two-faced Edwina Lovely, before meeting the troublesome Pesticide and the flower fairies. The story features a great many more characters than Muddle Earth. Some of the major new characters include:

Several new places appear in the story as well, some of which were briefly mentioned in Muddle Earth. New places include:

In late 2006, Muddle Earth was adapted as a one-off story for CBBC's Jackanory. The Jackanory version covers the Englebert the Enormous section only, with a light reading of the rest of the book towards the end. Muddle Earth is read by actor John Sessions and produced and directed by Nick Willing.

In 2009, the BBC commissioned an animated series of Muddle Earth for broadcast in spring 2010. The series consists of 2 seasons of thirteen 11-minute episodes. The programme is produced by CBBC (making the programme its first ever in-house long-form animation series as well as the first CBBC programme with music composed by Maurizio Malagnini and performed by the BBC Philharmonic), with animation from the Manchester-based Hullabaloo Studios, and features David Jason as the voice of Randalf. Sarah Muller serves as executive producer.

There has been no announcement to release the series on DVD as yet.

Characters exclusive to the CBBC series

CBBC on the web

As of October 2010 Muddle Earth World has been available to the public. It is a casual MMO.

On 10 January 2011, the soundtrack of the CBBC series was released for digital download.

All content from Kiddle encyclopedia articles (including the article images and facts) can be freely used under Attribution-ShareAlike license, unless stated otherwise. Cite this article:
Muddle Earth Facts for Kids. Kiddle Encyclopedia.