The park was created in 1979, and expanded to encompass Pink Lakes State Park in 1999. The lakes are dubbed "pink" after the beta-carotene pigment that colours it in late summer, caused by the algae Dunaliella salina. This area was the site of a major salt industry from 1916 to 1975. At its peak, ten thousand tons of salt was harvested and railed from Lake Crosbie, Lake Becking and Lake Kenyon to the nearby town of Linga. For management purposes, the Murray-Sunset National Park is managed with the Hattah-Kulkyne National Park, Wyperfeld National Park, Lake Albacutya Park and Murray-Kulkyne Park as part of the Victorian Mallee Parks.

Another defunct railway, the Nowingi line, terminates at the remains of a gypsum mine hopper on the Raak Plain. Other historical relics include Shearer's Quarters and Mopoke Hut, built as grazier accommodation in the 1960s. 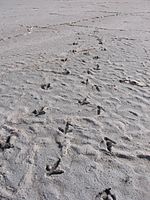 Emus, wedge-tailed eagles, and both western grey and red kangaroos are present.

Most of the park lies within the Murray-Sunset, Hattah and Annuello Important Bird Area (IBA), so identified by BirdLife International because it contains mallee habitat supporting a suite of threatened mallee bird species, including the malleefowl, black-eared miner and mallee emu-wren.

The park is attractive to bushwalkers as the nearest semi-arid region to Melbourne. Walks include circuits of Lake Crosbie and Lake Kenyon, and the three-day Sunset walking track. Groundwater is scarce, and hikers generally rely on water tanks maintained by rangers.

The Pink Lakes are medium-sized salt lakes. In late summer a red pigment, carotene, is secreted from the alga Dunaliella salina and gives a distinct pink colour to the lakes.

All content from Kiddle encyclopedia articles (including the article images and facts) can be freely used under Attribution-ShareAlike license, unless stated otherwise. Cite this article:
Murray-Sunset National Park Facts for Kids. Kiddle Encyclopedia.