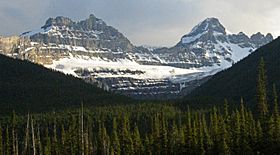 Mushroom Peak is a mountain located in the Sunwapta River valley of Alberta, Canada's Jasper National Park, lying just over a kilometre east of Diadem Peak. The mountain was named in 1947 by Noel E. Odell who made the first ascent (solo). Upon reaching the summit, he found that the dark limestone rocks there resembled mushrooms. The mountain can be seen from the Icefields Parkway.

Based on the Köppen climate classification, Mushroom Peak is located in a subarctic climate with cold, snowy winters, and mild summers. Temperatures can drop below -20 °C with wind chill factors below -30 °C. Precipitation runoff from the mountain drains into the Sunwapta River which is a tributary of the Athabasca River.

All content from Kiddle encyclopedia articles (including the article images and facts) can be freely used under Attribution-ShareAlike license, unless stated otherwise. Cite this article:
Mushroom Peak Facts for Kids. Kiddle Encyclopedia.