Mussel Rock is a rock formation on the coast of San Mateo County, California, offshore from Daly City. It consists of one large and numerous smaller rocks of a type known as a stack, where a headland is eroded unevenly, leaving small islands. The rock itself is located 15 meters from the shore of Mussel Rock Park and stands 18 meters tall.

The coastal area adjacent to the rock is Mussel Rock Park, consisting of 250 acres of land stretching along the coastline. The park includes a beach area, a paragliding launch pad, hiking trails, and a parking lot.

It is best known for being the closest point to the epicenter of the 1906 San Francisco earthquake, and where the San Andreas Fault enters the San Francisco Peninsula from the northwest. An additional minor fault, the Mussel Rock Fault, was identified in 2000. The area above Mussel Rock consists of steep cliffs with frequent landslides, threatening homes in a subdivision above.

Geology of the Mussel Rock formation

The Mussel Rock formation itself is a sea stack of Cretaceous period greenstone, from the Franciscan Complex bedrock, dated 80 to 90 million years ago. Contrasted with the nearby 3 million year old sedimentary rocks of the Merced Formation, the metamorphosed marine basalt comprising the greenstone of the Mussel Rock Formation from the Franciscan complex is more resistant to erosive forces.

John McPhee begins his 1993 book, Assembling California, with Mussel Rock. According to McPhee, "Mussel Rock is a horse. As any geologist will tell you, a horse is a displaced rock mass that has been caught between the walls of a fault. This one appears to have got away ... green seas slammed against it and turned white. It was not a small rock. It was like a three-story building, standing in the Pacific, with brown pelicans on the roof ... after a five hundred-mile northwesterly drift through southern and central California, this was where the San Andreas Fault intersected the sea."

The coastline area surrounding the Mussel Rock formation is at the intersection of several geological formations. The lowermost portion of the Merced Formation lends friable marine sandstone to the area, deposited there 2-3 million years ago. The portion of the Merced formation at Mussel Rock is among the older sedimentary deposits, deeper in the continental shelf, pushed to the surface by faulting.

The Merced sandstone variably overlies the greenstone of the Franciscan Complex. These two bedrock structures are separated at the surface by the San Andreas Fault. To the northeast, a thin layer of the Colma formation overlies the Merced. 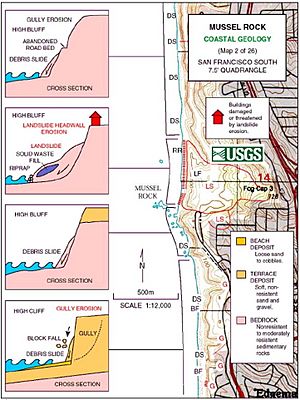 Due to active erosion, seismic activity, and the loosely cemented nature of the local Colma and Merced formations, the area is an active landslide zone. During ENSO years, coastal erosion on the Merced and Colma formations can average up to 2 to 3 feet per year. In addition to erosion via tides and winds, movement along the San Andreas fault and Mussel Rock fault and construction along the clifftops contribute to erosion in the area, exacerbating the risk of landslides.

All content from Kiddle encyclopedia articles (including the article images and facts) can be freely used under Attribution-ShareAlike license, unless stated otherwise. Cite this article:
Mussel Rock Facts for Kids. Kiddle Encyclopedia.