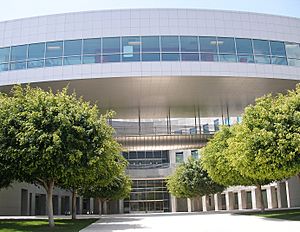 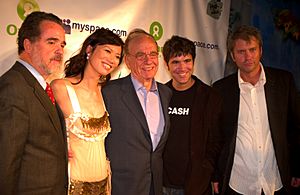 Myspace (stylized as myspɑce) is a social networking website offering an interactive, user-submitted network of friends, personal profiles, blogs, groups, photos, music, and videos. Myspace was the largest social networking site in the world from 2005 to 2009. It is headquartered in Beverly Hills, California.

Myspace was acquired by News Corporation in July 2005 for $580 million, and in June 2006 surpassed Google as the most visited website in the United States. In April 2008, Myspace was overtaken by Facebook in the number of unique worldwide visitors and was surpassed in the number of unique U.S. visitors in May 2009, though Myspace generated $800 million in revenue during the 2008 fiscal year. Since then, the number of Myspace users has declined steadily in spite of several redesigns. As of January 2018, Myspace was ranked 4,153 by total Web traffic, and 1,657 in the United States.

Myspace had a significant influence on pop culture and music and created a computer game platform that launched the successes of Zynga and RockYou, among others. Despite an overall decline, in 2015 Myspace still had 50.6 million unique monthly visitors and had a pool of nearly 1 billion active and inactive registered users.

In June 2009, Myspace employed approximately 1,600 employees. In June 2011, Specific Media Group and Justin Timberlake jointly purchased the company for approximately $35 million. On February 11, 2016, it was announced that Myspace and its parent company had been purchased by Time Inc. Time Inc. was in turn purchased by the Meredith Corporation on January 31, 2018.

Myspace Inc. is a web page where individuals can communicate, and exchange information with their network of friends. Users can set up a personal profile, which can be changed, and new graphics and pictures and additional material can be added. All members can upload pictures to share with their friends, and others have permission to comment on their pictures and uploaded materials.

Also the user can choose to play games on, and post blogs to share with their friends and family.

Myspace has users all over the world which includes:

All content from Kiddle encyclopedia articles (including the article images and facts) can be freely used under Attribution-ShareAlike license, unless stated otherwise. Cite this article:
Myspace Facts for Kids. Kiddle Encyclopedia.