The Nacoochee Mound (Smithsonian trinomial 9WH3) is an archaeological site on the banks of the Chattahoochee River in White County, in the northeast part of the U.S. state of Georgia. Georgia State Route 17 and Georgia State Route 75 have a junction near here.

First occupied as early as 100-500 CE, the site was later developed and occupied more intensively by peoples of the South Appalachian Mississippian culture (a regional variation of the Mississippian culture) from 1350 to 1600 CE. They built a characteristic platform mound at this site, and evidence of related villages were found both east and west of the mound. A professional archeological excavation revealed a total of 75 human burials, with artifacts that support dating of the site.

The 19th-century gazebo was added on top of the mound in 1890 by a European-American owner of the land. After the mound was excavated, former governor Lamartine Griffin Hardman had a reconstruction built on his property south of Helen, Georgia.

George Gustav Heye, sponsor of the original excavation in 1915, claimed that the historic Cherokee had inhabited the site, which was within their homelands. A historical marker on the site refers to such habitation. But, James B. Langford of The Coosawattee Foundation says that the excavation necessary to confirm such a claim has not been performed.

A 1734 land grant between Great Britain and the Cherokee lists Nacoochee (Cherokee: ᎾᎫᏥ, translit. Nagutsi) as a town of Cherokee territory but does not describe its exact location.

The site is part of the Sautee Valley Historic District. It was added to the National Register of Historic Places on August 20, 1986 as reference number 86002742. 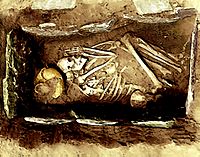 In the 1870s, the mound site was owned by Captain John H. Nichols, who reported plowing up stone box graves to the west of the mound. (These are now known to be artifacts of the Mississippian culture.) In Charles C. Jones's 1873 report on Native American sites in Georgia, he described the mound as being 16 feet (4.9 m) in height. In 1890 Captain Nichols removed the top 2 feet (0.61 m) of the mound and built a gazebo on its new summit, which became noted locally.

The mound was formally excavated in 1915 by a team of archaeologists headed by Frederick Webb Hodge and George H. Pepper and sponsored by the Heye Foundation, the Museum of the American Indian, and the Bureau of American Ethnology (now part of the Smithsonian Institution). It is considered one of the earliest scientific archeological excavations in the state.

George Gustav Heye, Hodge and Pepper published a book about the excavation, The Nacoochee Mound in Georgia (1918), which included photographs. The excavation uncovered 75 human burials, including 56 adults, seven adolescents, and four children, and eight bodies that were too degraded for their ages to be determined.

The burials were layered, dating from different time periods. About a third of the individuals were buried with artifacts indicative of social status, including hammered copper and stone celts, conch shell beads and cups, and elaborate Mississippian culture pottery. Some later burials included glass beads and sheet brass ornaments, indicating that these were intrusive burials from the 17th-century contact period with Europeans.

Test excavations at the site in 2004 by the University of Georgia Archaeology Field School resulted in evidence that, combined with current knowledge and theory, enabled refinement of dating about inhabitants of the site. It was occupied during the Early Middle Woodland Cartersville Phase. It was most intensively occupied during the Mississippian period, from 1350 to 1600 CE during the Lamar Phase. Pottery sherds characteristic of the Etowah Indian Mounds site in Cartersville, Georgia were found at the site and are evidence that the two sites were occupied during the same time period. A small village area was located in the field to the east of the mound and a much larger village area in the field to the west of the mound.

Archaeological evidence suggests that Nacoochee Mound site, and a nearby mound site called the Eastwood Site (9Wh2), served as local administrative centers for associated villages in the late 15th century and early 16th centuries. The village was not excavated, but James B. Langford suggested that it may have been occupied later than the period above. Nacoochee and Chota are Cherokee towns noted in this valley during a 1715 colonial expedition by Colonel George Chicken, and they later appeared on maps of the area. This site may have been one of the villages. Both Nacoochee and Chota towns were abandoned by the Cherokee after the mid-eighteenth century.

A bronze state historical marker at the site, dated 1955, says that, according to legend, it is the "ancient Cherokee town of Gauxule, visited by Hernando de Soto in 1540". While there was speculation about De Soto's path, early translations of his chronicles were not believed by later 20th-century scholars to be accurate. Since then scholars have pieced together his route based on the use of topographic and geographic data, as well as the chronicles. Some parts are still disputed.

The original Nacoochee Mound was partially excavated. Former Georgia governor Lamartine Griffin Hardman had a reconstruction of this mound built at his estate in the Nacoochee Valley in White County, two miles south of Helen. It still stands.

All content from Kiddle encyclopedia articles (including the article images and facts) can be freely used under Attribution-ShareAlike license, unless stated otherwise. Cite this article:
Nacoochee Mound Facts for Kids. Kiddle Encyclopedia.