The Neoproterozoic Nankoweap Formation (pronounced Nan' coe weep), is a thin sequence of distinctive red beds that consist of reddish brown and tan sandstones and subordinate siltstones and mudrocks that unconformably overlie basaltic lava flows of the Cardenas Basalt of the Unkar Group and underlie the sedimentary strata of the Galeros Formation of the Chuar Group. The Nankoweap Formation is slightly more than 100 m in thickness. It is informally subdivided into informal lower and upper members that are separated and enclosed by unconformities. Its lower (ferruginous) member is 0 to 15 m thick. The Grand Canyon Supergroup, of which the Nankoweap Formation is part, unconformably overlies deeply eroded granites, gneisses, pegmatites, and schists that comprise Vishnu Basement Rocks.

The strata of the Nankoweap Formation are exposed in a small area that occupies an area from just south of Carbon Canyon to Basalt Canyon on the west bank of the Colorado River around Comanche Creek and Tanner Canyon on the east bank of the Colorado River within the eastern Grand Canyon, Coconino County, Arizona. It and associated strata of the Unkar and Chuar Groups are preserved in a prominent syncline and fault block. The most complete, readily accessible, and easily studied, exposure of the Nankoweap Formation occurs in Basalt Canyon.

The nomenclature of the Nankoweap Formation has changed over time. Originally, the strata of the Nankoweap Formation was included in-part in the top of the "Unkar terrane" (Group) and in-part in the basal “Chuar terrane” (Group) by Walcott in 1894. Van Gundy first recognized the thin sequence of red beds unconformably overlying basaltic flows of the Unkar Group as a separate stratigraphic unit, which he called the “Nankoweap Group.“ 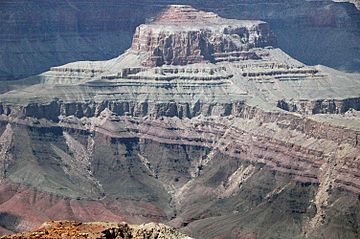 Although more extensive outcrops exist in Basalt Canyon, Comanche Creek, and Tanner Canyon, it is named for a small, fault-bounded block of the Nankoweap Formation in Nankoweap Canyon. It was argued that these redbeds belonged neither to the underlying Unkar Group nor overlying Chuar Group. Maxson in his geological mapping reduced the Nankoweap Group to formational rank because the Nankoweap had not been subdivided into formations. Later, a locally preserved lower member (ferruginous unit and weathered zone) that unconformably overlies the Cardenas Basalt and is unconformably overlain by the upper member of the Nankoweap – was recognized.

The Nankoweap Formation is slightly more than 100 m in thickness. Currently, it is informally divided into two informal members, the lower (ferruginous) member and the upper member. These members are separated and enclosed by unconformities.

The upper member of the Nankoweap Formation consists of about 100 m of generally reddish-purple, fine-grained, quartzitic sandstones. They are shaley and silty towards the top. The sandstones sometime contain conglomeritic horizons composed of rounded, disc-shaped pebbles of Dox Sandstone and occasional pebbles of basalt lava. A lag deposit of gravel composed of white to yellowish, small pebble to cobble size chert gravel occurs locally at the base of the upper member. Typically, the sandstone sections are thin-to-medium bedded and exhibit planar tabular and trough cross-bedding, ripple marks, mudcracks, numerous soft-sediment deformation structures, and rare salt pseudomorphs. Towards the top of the upper member, massive, meter-scale sandstone beds become common.

Van Gundy identified a structure found in a sandstone bed of the Nankoweap Formation in Basalt Canyon as a trace fossil impression of a stranded jellyfish. This structure is approximately 12 cm in diameter and consists of a series of radiating lobes, rounded at their ends. Some of these lobes have a median groove radiating from a small, irregular hollow. Initially, later studies also considered this to be a jellyfish impression and it was eventually named “Brooksella canyonensis” by Bassler. Later, Cloud obtained a partial second specimen and argued that both specimens were of inorganic origin and formed by "compaction of fine sands deposited over a compressible but otherwise unidentifiable structure, possibly a small gas blister." Paleontologists, who were unconvinced by Cloud's interpretation, reinterpretated this structure to be a burrow (trace fossil), known as “Asterosoma,“ made by a sediment feeding, worm-like organism. Other paleontologists, who later reexamined both specimens, argued that they are inorganic, sedimentary structures similar to small "sand-volcanoes" formed by the upward expulsion of gas or fluid from sediments as more sediment is loaded on top or as the sediment is shaken during seismic activity. Both specimens are very similar in morphology to sedimentary structures initially interpreted to be fossil jellyfish and named “Astropolithon.” Like Brooksella canyonensis, Astropolithon is now regarded to be the result of the venting of fluidized sand into surficial sediments blanketed by microbial mats that were typical of Precambrian sea- and lake-bottoms. Very similar sedimentary structures have been observed in a thick tsunami deposit related to the asteroid impact at the Cretaceous–Paleogene boundary

Within Nankoweap Canyon, prospect pits have been dug into numerous patches of sandstone that have been replaced by hematite. In these prospect pits, barite cemented sandstone, and thin barite veins, have been found. A few of these patches exceed 10 feet in width. The sandstones containing these patches are highly deformed and cut by numerous small faults. 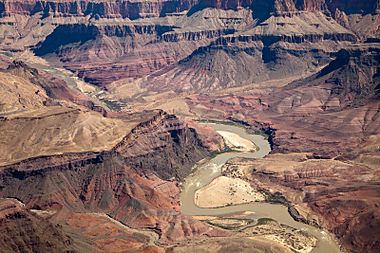 Nankoweap Creek is located upstream from the Lipan Point–Basalt Creek section. The creek is west of Marble Canyon, and enters the canyon near Lower Marble Canyon.

The Tanner Graben, a downdropped graben of Dox Formation and Cardenas Basalt is topped by a bright, multilayered section of the Nankoweap Formation. It lies opposite Tanner Creek-(Tanner Canyon) which is the source for the Tanner Rapid, at the foot of Tanner Graben.

All content from Kiddle encyclopedia articles (including the article images and facts) can be freely used under Attribution-ShareAlike license, unless stated otherwise. Cite this article:
Nankoweap Formation Facts for Kids. Kiddle Encyclopedia.