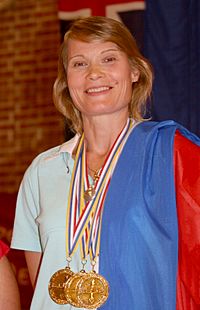 Natalia Vadimovna Molchanova (Russian: Наталья Вадимовна Молчанова, 8 May 1962 – 2 August 2015) was a Russian champion free-diver. She was the President of the Russian Freedive Federation. Molchanova was born in Ufa in 1962. She was the world's most decorated free-diver ever, with a total of 40 world records.

On 2 August 2015 she was reported missing after a dive near Ibiza, Spain. Initial rescue and recovery efforts were unsuccessful. She was presumed dead by drowning by rescue officials and her son.

All content from Kiddle encyclopedia articles (including the article images and facts) can be freely used under Attribution-ShareAlike license, unless stated otherwise. Cite this article:
Natalia Molchanova Facts for Kids. Kiddle Encyclopedia.