The National Museum of American Jewish History (NMAJH) is a Smithsonian-affiliated museum at 101 South Independence Mall East (S. 5th Street) at Market Street in Center City Philadelphia. It was founded in 1976.

In March 2020, The National Museum of American Jewish History filed for Chapter 11 bankruptcy protection, seeking relief from debt incurred by the construction of its Independence Mall home. The museum's debts included over $30 million to bondholders, and an additional $500,000 to unsecured creditors; at the time of the bankruptcy filing, the museum was paying 20% of its annual budget in interest payments. The filing followed several years of decreasing attendance, revenue, and fundraising. The museum's operations were not affected by the bankruptcy.

In August 2020, following the signing ceremony for the Great American Outdoors Act in which President Donald Trump mispronounced the name of Yosemite National Park as "yo-semites", the museum's online gift shop experienced a surge in sales for a pre-existing, similarly phrased "Yo Semite" T-shirt. Sales of the shirt, which brought in $30,000 in the three days following Trump's statement and led to continued sales thereafter, provided unexpected international publicity and a financial lifeline to the museum. 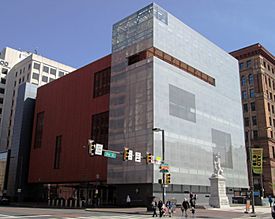 In 2005, it was announced that the museum would be moved to a new building to be built at Fifth Street and Market Street on the Independence Mall. The site was originally owned by CBS' KYW radio and KYW-TV. The project broke ground on September 30, 2007. The 100,000-square-foot (9,300 m2) glass and terra-cotta building was designed by James Polshek and includes an atrium, a 25,000-square-foot (2,300 m2) area for exhibits, a Center for Jewish Education, and a theater. The structural engineer was Leslie E. Robertson Associates.

The project, including endowment, cost $150 million. The opening ceremony was held November 14, 2010 and was attended by over 1,000 people, including Vice President Joe Biden, Mayor Michael Nutter, Governor Ed Rendell, and Rabbi Irving Greenberg. The building opened to the public November 26, 2010.

Exhibits use pieces from the museum's collection which includes over 30,000 objects and ranges from the Colonial period to the present day. Exhibits have focused on the lives and experiences of Jews in America, with past exhibitions centering on Ruth Bader Ginsburg and Leonard Bernstein. Professor Jonathan Sarna of Brandeis University led the development of the core exhibit for the museum.

To Bigotry No Sanction: George Washington and Religious Freedom

From June 29 through September 30, 2012, the NMAJH held a special exhibition that featured one of the most important documents pertaining to religious freedom in the United States. The letter was written in 1790 to the Hebrew Congregation in Newport, Rhode Island, addressing the new country's religious freedom. The letter expressed the new government's commitment for religious freedom and equality for all faiths. The exhibition included numerous artifacts as well as early printings of the Declaration of Independence and the Constitution.

From the Core Exhibition in 2010

All content from Kiddle encyclopedia articles (including the article images and facts) can be freely used under Attribution-ShareAlike license, unless stated otherwise. Cite this article:
National Museum of American Jewish History Facts for Kids. Kiddle Encyclopedia.