The national colours of Australia are green and gold. They were established by the Governor-General of Australia, Sir Ninian Stephen, on 19 April 1984 in the Commonwealth of Australia Gazette; on advice from Prime Minister Bob Hawke.

The Australian government states that, to be used correctly, the colours are placed side-by-side, with no other colour between them. The exact green and gold colours are specified as Pantone Matching System numbers 348C and 116C. The colours are always referred to as 'green and gold'.

Other colour combinations have been used to represent Australia:

According to the Australian government, "green and gold have been popularly embraced as Australia’s national sporting colours" since the late 1800s. Nearly every current Australian national sports team wears them (although the hues and proportions of the colours may vary between teams and across eras). Australia's cricket team first wore the colours in 1899, in the form of the baggy green, the cap presented to Australian cricket players.

The Australasian Olympic team adopted "green and wattle" in 1908, but not every team played in the colours. In the 1912 Olympics, an official Australian uniform was adopted for the first time: green vests with gold trimming, and white shorts with green and gold trimming. 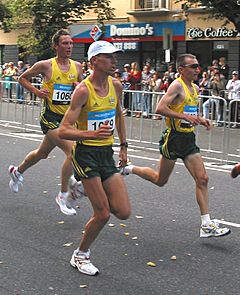 Teams that wear the green and gold include:

Since 1961, the Wallabies have worn a gold jersey with green lettering and trim; they changed from a primarily green jersey to avoid a colour clash with the Springboks of South Africa.

All content from Kiddle encyclopedia articles (including the article images and facts) can be freely used under Attribution-ShareAlike license, unless stated otherwise. Cite this article:
National colours of Australia Facts for Kids. Kiddle Encyclopedia.