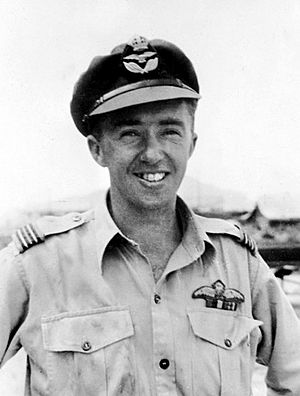 Air Chief Marshal Sir Neville Patrick McNamara, KBE AO AFC AE (17 April 1923 – 7 May 2014) was an Australian war veteran. He was the senior commander of the Royal Australian Air Force (RAAF). He served as the RAAF's highest-ranking position, Chief of the Air Staff (CAS), from 1979 until 1982. He was also Chief of the Defence Force Staff (CDFS), Australia's top military role at the time, from 1982 until 1984.

McNamara was born in Toogoolawah, Queensland.

McNamara died on 7 May 2014 in Jervis Bay, New South Wales, aged 91. His wife and two daughters outlived him.

All content from Kiddle encyclopedia articles (including the article images and facts) can be freely used under Attribution-ShareAlike license, unless stated otherwise. Cite this article:
Neville McNamara Facts for Kids. Kiddle Encyclopedia.