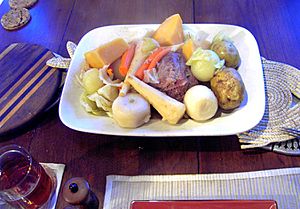 A New England boiled dinner is a traditional New England meal, consisting of corned beef with cabbage and one or more root vegetables, such as potatoes, rutabagas, parsnips, carrots, turnips, or onions. The leftovers are traditionally diced and fried into “red flannel hash” for breakfast the next day. The dish resembles boiled beef from English cuisine, as well a similar Newfoundland dish called a "Jiggs dinner".

Corned beef and cabbage, a boiled meal prepared by Irish-Americans on St. Patrick's Day, is similar, but typically contains fewer types of root vegetables. Irish immigrants who arrived in America in the 19th century substituted corned beef in the Irish dish bacon and cabbage. Corned beef, which most Irish could not afford in Ireland, was relatively cheap in American cities at the time, and Irish immigrants quickly adopted this former luxury.

A corned beef is placed whole in a pot on stove or in a crock pot with water to cover the meat. The meat is simmered until near tender, then cabbage and root vegetables are added and cooked through. Rutabagas or turnips are also common ingredients. When New England boiled dinners includes beets, they are often cooked and served separately to avoid discoloring the dinner.

All content from Kiddle encyclopedia articles (including the article images and facts) can be freely used under Attribution-ShareAlike license, unless stated otherwise. Cite this article:
New England boiled dinner Facts for Kids. Kiddle Encyclopedia.