New Market is a town in Montgomery County, Indiana, in the United States. The population was 636 at the 2010 census.

The town of New Market was platted in 1872 by Joseph White Sr.,Carson Wray Sr., Joseph Kelsey and William K. White, during the construction of the S.C.L&W. railway through the area. The construction of the line was to serve the cities of Frankfort, Crawfordsville and Terre Haute. In southern Montgomery County it passed through the communities of New Market, Waveland, Brownsvalley and Crawfordsville and Lake Holiday. The line was later sold to the Pennsylvania Railroad and abandoned in the 1970s.

In 1893, during the run-up to prohibition, citizens of New Market burned a saloon owned by Jake Feel; a second saloon, owned by Joe Haskins, was burned in December 1894. //reference Chicago Daily Tribune December 22, 1984, page 1, column 6 - "Burn a Saloon and Boast of It"//

There were 238 households, of which 39.5% had children under the age of 18 living with them, 54.2% were married couples living together, 14.3% had a female householder with no husband present, 6.7% had a male householder with no wife present, and 24.8% were non-families. 21.4% of all households were made up of individuals, and 7.2% had someone living alone who was 65 years of age or older. The average household size was 2.67 and the average family size was 3.08. 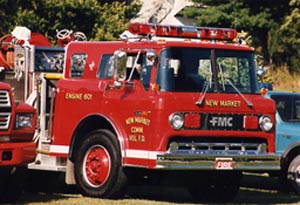 All content from Kiddle encyclopedia articles (including the article images and facts) can be freely used under Attribution-ShareAlike license, unless stated otherwise. Cite this article:
New Market, Indiana Facts for Kids. Kiddle Encyclopedia.