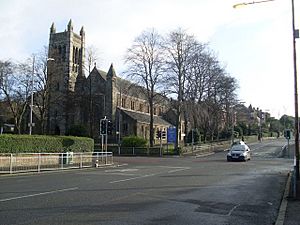 Newlands is a suburban area of the South Side of Glasgow, Scotland. The area is mainly residential in character. House prices in the area are consistently above the national average, with the average house price for 2006 being around £185,000.

The Newlands fete is held annually and takes place within Newlands park.

The largest and most notable retail facility in the district is the Morrisons supermarket (originally a Safeway) which also serves the adjacent districts of Shawlands and Pollokshaws.

It also is home to many traditional shops which include The Newlands Cafe which sells ice cream.

In terms of sport, Newlands plays host to top Junior side Pollok F.C. who play at Newlandsfield Park, regularly attracting crowds of over 500. It also has an amateur football team, Newlands AFC who play in the Glasgow Colleges Second Division.

Newlands also has a Bowling Club, Tennis Club and a park which is home to tennis courts.

All content from Kiddle encyclopedia articles (including the article images and facts) can be freely used under Attribution-ShareAlike license, unless stated otherwise. Cite this article:
Newlands, Glasgow Facts for Kids. Kiddle Encyclopedia.