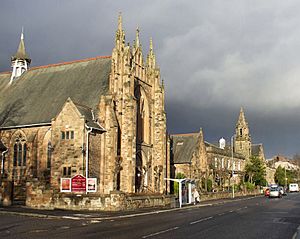 Cathcart (Scots: Kithcart, Scottish Gaelic: Coille Chart) is an area of Glasgow between Battlefield, Mount Florida, King's Park, Muirend and Newlands. The White Cart Water flows through Cathcart, downstream from Linn Park. In 2014, it was rated one of the most attractive postcode areas to live in Scotland.

Originally part of the Burgh of Govan in Renfrewshire, most of the ancient parish was annexed by the City of Glasgow in 1912, but it retains a distinct local identity. Cathcart is mainly a residential area, containing a mix of tenements, terraces and villas built from red or blonde sandstone. There are some historic buildings, including the Couper Institute (a public hall and library) and the Snuff Mill. One of Alexander Thomson's most significant buildings, Holmwood House, is situated in Cathcart, close to the Glasgow city boundary.

Cathcart is served by Cathcart railway station on the Cathcart Circle Line, as well as numerous bus routes.

All content from Kiddle encyclopedia articles (including the article images and facts) can be freely used under Attribution-ShareAlike license, unless stated otherwise. Cite this article:
Cathcart Facts for Kids. Kiddle Encyclopedia.