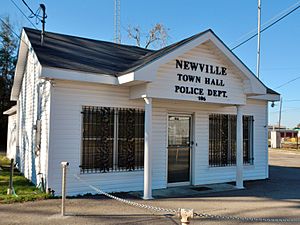 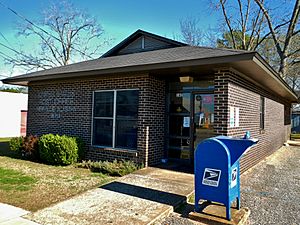 Newville is a town in Henry County, Alabama, United States. It is part of the Dothan, Alabama Metropolitan Statistical Area. At the 2010 census the population was 539, down from 553 in 2000.

James Madison Wells founded a village called "Wells" c. 1882. When Abbeville Southern Railroad laid tracks through the town in 1893, its name was changed to "Wells Station". The post office was built in 1894. Wells Station incorporated as "Newville" in 1903.

The town of Newville became prosperous with merchants, banks, lodges, doctors, churches, a Newville High School, a Rosenwald High School, societies, a newspaper, a depot, sawmills, cotton gins, mule stables and all the elements required by a developing town. Newville's slow decline commenced after the Great Depression due to farm mechanization and loss of commerce.

James M. and Catherine Wells donated one-half acre of land in 1887 for the site of the church and cemetery. The oldest known grave is that of William Y. Kirkland who died April 10, 1891. The church paid W.M. Harris fifty dollars in 1901 for two and one-half acres of land for the cemetery. In 1947, burial spaces were sold for 25 center per square foot. Nancy Price gave the church one acre of land for the cemetery in 1958. There are over 700 marked and unmarked graves. The Newville Cemetery was listed on the Alabama Historic Cemetery Register in 2005.

The first known school in Newville was at Center Church in 1881. When Grange Hall was built in 1891, church service and school were held on the first floor. In 1913, Grange Hall was torn down and the wood was used to build a school. Newville Public School became Newville Junior High in 1920. In 1923, it was decided to build a modern brick school. Newville High School was opened in 1929. The school building at Concord was moved to Newville in 1935. In 1936, the school building burned. A new structure was built with five rooms and a large auditorium. In 1938, the Works Progress Administration built the Vocational builfing. When bathrooms were added in 1944, Newville School became one of the most modern buildings in Henry County. The Newville High School band was organized in 1961. In 1968, Newville High School closed.

In 1894, the first known black school in Newville was organized and a building was built. The Jacksonian Enterprise School opened in May 1894. Parents and patrons financially supported this school. The school library contained more books than any school in this part of the country. The school grounds included Store's Grove, a circular grove of 104 oak trees with a 30-foot avenue running through the middle of it. Each tree was named in honor of a patron. In 1919, the Newville Community requested assistance for the school. They received it from the Rosenwald Foundation. A new school was built and named "Newville Rosenwald School". The Henry County Board of Education began to contribute to the finances of Newville Rosenwald School about 1922. During the late 1940s, Newville Rosenwald School became a high school. It was about this time that the original school burned down and a new building was constructed. In 1968 Rosenwald High School was closed.

There were 221 households, out of which 32.6% had children under the age of 18 living with them, 52.0% were married couples living together, 17.2% had a female householder with no husband present, and 26.2% were non-families. 23.1% of all households were made up of individuals, and 11.8% had someone living alone who was 65 years of age or older. The average household size was 2.50 and the average family size was 2.93.

All content from Kiddle encyclopedia articles (including the article images and facts) can be freely used under Attribution-ShareAlike license, unless stated otherwise. Cite this article:
Newville, Alabama Facts for Kids. Kiddle Encyclopedia.