Niantic is a census-designated place (CDP) and village in the town of East Lyme, Connecticut in the United States. The population was 3,114 at the 2010 census. 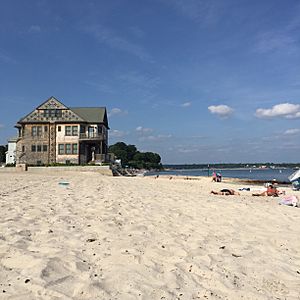 Located on Long Island Sound, Niantic Bay is popular for swimming, fishing and boating. Wednesday evenings and weekend afternoons, the Niantic Bay Yacht Club organizes sailboat races and the Bay is filled with sailboats. The Millstone Nuclear Power Plant in nearby Waterford is visible on the bay's eastern horizon line.

Beachgoers may want to seek out the local Rocky Neck State Park, whose mile of beach offers much better views of Long Island Sound, including several offshore islands such as Gardiners Island, Plum Island, and Orient Point, the distant tip of Long Island. 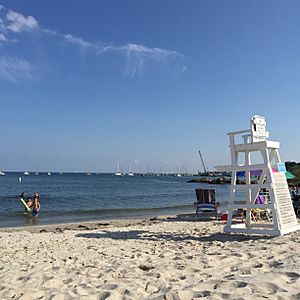 The Rocky Neck beach is known for its sandbar, one of the few places along the Connecticut shoreline free of rocks and stones. At low tide the sandbar lies exposed and bathers may be able to walk out into the water for quite some distance before reaching waist depth. The sandbar at low tide is a popular place with kids for building sandcastles, digging holes and flinging mud. Besides beachgoing, Rocky Neck offers camping in the summertime, and a large, flat meadow area with a number of picnic tables and outdoor barbecue grills.

In the off-season, Rocky Neck is popular with locals for hikes through the woods. The wooded areas of Rocky Neck feature some great hiking trails. Spring and fall are beautiful times for hiking and enjoying the quieter side of Rocky Neck. On mild winter days one will find local inhabitants enjoying a stroll along the beach.

Niantic was once famous for its Niantic River scallops, but the scallop population has been in decline for a number of years. However, boating, fishing and swimming are all popular summer activities up and down the river.

There were 1,404 households out of which 24.6% had children under the age of 18 living with them, 46.3% were married couples living together, 10.5% had a female householder with no husband present, and 40.5% were non-families. 33.4% of all households were made up of individuals and 11.7% had someone living alone who was 65 years of age or older. The average household size was 2.20 and the average family size was 2.81.

All content from Kiddle encyclopedia articles (including the article images and facts) can be freely used under Attribution-ShareAlike license, unless stated otherwise. Cite this article:
Niantic, Connecticut Facts for Kids. Kiddle Encyclopedia.