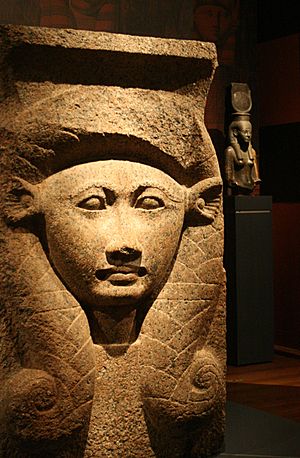 The Nicholson Museum is named after its founder, Sir Charles Nicholson. In 1856-57, Nicholson traveled throughout Egypt and then Italy where he acquired the first thousand or so primarily ancient Egyptian, Greek, South Italian and Etruscan artefacts. These he donated to the University in 1860. The museum's collection has grown exponentially since this founding donation. Individual benefaction, donations, sponsored archaeological projects and curatorial acquisition have all contributed to the wealth of material now housed by the Nicholson Museum.

The museum currently has a mixture of permanent and temporary exhibition areas within its gallery. Permanent or ongoing exhibitions include: Egyptians, Gods and Mummies: Travels with Herodotus, Aphrodite's Island: Australian Archaeologists in Cyprus; The Etruscans: A Classical Fantasy; Tombs, Tells and Temples: Excavating the Near East as well as a permanent display of artefacts from the Greek and Italian Classical world. Temporary exhibitions include: LEGO Pompeii, featuring a large scale model of the site of Pompeii in LEGO and 50 Objects, 50 Stories – that closed in July 2015.

The Nicholson Museum, along with its sister institutions, the Macleay Museum and the University Art Gallery, were united under a single director, David Ellis, in 2003 to form Sydney University Museums. In 2005, Michael Turner was appointed Senior Curator.

The permanent collections of the Nicholson Museum span the ancient world with primary collection areas including the Classical world of Greece and Italy, Egypt, Cyprus, the Near East and Northern Europe from the Neolithic to Medieval periods. The Museum also possesses a significant historic photograph collection of over 1,350 glass negatives taken by former curator William J. Woodhouse.

The ancient Egyptian collection of the Nicholson Museum includes artefacts from a variety of ancient sites including Abydos, Alexandria, Bubastis, Fayum, Heliopolis, Memphis, Saqqara, and Thebes. Egyptian material formed a large part of Sir Charles Nicholson's founding donation. He traveled throughout Egypt between 1856 and 1857 purchasing artefacts from dealers in Cairo and Luxor as well as collecting artefacts straight from sites, including Karnak where he collected a fragment of a red granite thought to be from Hatshepsut's obelisk.

Beginning in 1860 with a single artefact from the original donation by Sir Charles Nicholson, the collection grew exponentially, especially under the curatorial direction of firstly William Woodhouse (honorary curator 1903-1938) and then James Stewart (honorary curator 1954-1962). Many of the artefacts within the collection were sourced directly from Stewart's own excavations conducted at Bellapais Vounous, Karmi Palealona, Karmi Lapasta, Nicosia Ayia Paraskevi and Vasilia Kafkallia as well as from the excavations of at the sites of Myrtou Stephania and Myrtou Sphagion, conducted by Stewart's former student Basil Hennessy, who later became Professor of Near Eastern Archaeology at the University of Sydney. As a result of these acquisitions, the Museum holds many complete tomb groups of archaeological importance.

The Nicholson Museum's Greek collections contains artefacts representative of the material culture of the Greek mainland, islands and surrounding regions, from the Bronze Age through to the Late Hellenistic period. During Sir Charles Nicholson's travels to Egypt and Europe between 1856 and 1858 he acquired, primarily in Rome, a range of Classical and Hellenistic Greek ceramics as well as terracotta figurines. In total over seventy significant Greek artefacts were included in the founding donation of the Nicholson Museum. Further material, representative of the Greek mainland and islands, was bought during the curatorship of A. D. Trendall. His proactive acquisition program involved purchasing a wide range of ceramic types of Greek origin as well as significant contributions of sherd material for teaching purposes sought from prominent museums and individual collectors and scholars, including Sir John Beazley. The collection was then expanded following a donation of hundreds of pottery fragments and small votive objects by the family of former curator William J Woodhouse in 1948. The majority of this material is thought to have been collected during Woodhouse's 1890s and 1930s trips to Greece, documented in the Woodhouse photographic collection.

The Nicholson Museum's Italian collection is representative of the diversity of the ancient Italian world with significant cultural material from Etruria, South Italy and the Roman World. From the museum's foundation the cultures of ancient Italy have been strongly represented in the collection. Sir Charles Nicholson spent considerable time in Rome collecting Latin inscriptions, Etruscan funerary urns and bronzes, South Italian vases and Roman lamps, figurines and ceramics. Additional large sculptural works were also acquired by Sir Charles including two life-sized togatus statues along with several fragmentary figures. The Italian collection was further developed with the acquisition of a significant corpus of South Italian vases by A.D. Trendall during his curatorial tenure. Many of the significant pieces from the South Italian collection have been comprehensively published in the first Corpus Vasorum Antiquorum of an Australian collection.

The Nicholson Museum's collection of Near Eastern artefacts represents many of the great cities and civilisations that flourished along the Levantine coast, across Mesopotamia and through to Pakistan and India. The Near Eastern collection began with just a handful of artefacts from Ur, donated by the British Museum in 1926. This was greatly expanded upon in the mid 20th century by the acquisition program of the curators A.D. Trendall and his successor James Stewart. Both curators wrote countless letters to museums and government agencies around the world requesting representative samples of artefacts to ensure the Nicholson Museum's holdings reflected the diversity of this expansive region. The University of Sydney also contributed financially to archaeological excavations and projects in the Near East, most notably Dame Kathleen Kenyon’s excavations at Jericho. In return for the University's support the Nicholson Museum received a consignment of objects at the end of each season including full tomb groups from the Bronze Age and rare finds such as our Neolithic over plastered skull. Other items have been acquired through generous donations of individual archaeologists, including Sir Leonard Woolley and Sir Flinders Petrie, as well as from archaeological institutes, museums and private donors.

A modern display of Pompeii built with LEGO is in Nicholson museum. Professional LEGO builder Ryan McNaught assembled the work. The display shows Pompeii as it was the moment of destruction, as it was when rediscovered, and as it is today. The exhibit appears to be an attempt to appeal to contemporary audiences, and especially a younger generation, including current HSC ancient history students, as Pompeii is an early part of the curriculum taught. Upon seeing the exhibit it is apparent that a lot of work has gone into it (around 470 hours). The deep red glow – only noticeable from the rear of the piece – foreshadows the eruption of Mount Vesuvius, which destroyed the town. The exhibit has attracted new audiences to Nicholson Museum.

All content from Kiddle encyclopedia articles (including the article images and facts) can be freely used under Attribution-ShareAlike license, unless stated otherwise. Cite this article:
Nicholson Museum Facts for Kids. Kiddle Encyclopedia.