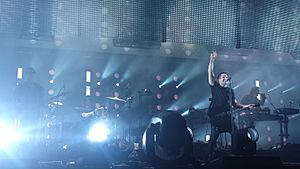 The rock band Nine Inch Nails started doing tours when it was first made in 1988. Trent Reznor started the band and does most of the work for the band's studio. The band has played in many festivals. For example, they played at Woodstock '94, Lollapalooza in 1991 and 2008, and the MTV Video Music Awards. Before 2013, they did 938 gigs.

Nine Inch Nails does not play the same in concerts than when they do in studios. Reznor makes and plays most of the band's music. Other people might sing or play instruments if it is needed for the song. Reznor makes groups of backing musicians (people who play for concerts). Alessandro Cortini (one of the band's keyboardists) said that how the band plays in studios and in CDs is different from how they play in concerts.

Before 2016, Reznor was the only member of the band. Nine Inch Nails' concerts have lighting effects used for the stage. The effects have been done by Reznor and Rob Sheridan starting in 1999. Three tours have been talked about in albums and documentaries.

Critics have said that the tours are good. Some critics talk about how the stage feels aggressive. They also liked the effects that the stage uses. In 2008, Reznor wanted the band to stop touring after 2009. They started touring again in 2013.

All content from Kiddle encyclopedia articles (including the article images and facts) can be freely used under Attribution-ShareAlike license, unless stated otherwise. Cite this article:
Nine Inch Nails live performances Facts for Kids. Kiddle Encyclopedia.