Noarlunga Centre is a suburb in the City of Onkaparinga in the southern suburbs of Adelaide, South Australia. The suburb is mostly commercial, being dominated by the Centro Colonnades shopping centre and the small 'Inspire Noarlunga' estate to the east of Goldsmith Road. The suburb is bordered by Beach Road to the north, Dyson Road to the west Goldsmith Road to the south and the Southern Expressway to the east. Burgess Drive, Seaman Road and David Witton Drive are the main thoroughfares inside the boundaries of the suburb.

The name Noarlunga is an English adaptation of the native Kaurna word Nurlongga, meaning 'at the curvature', referring to the horseshoe bend near the mouth of the Onkaparinga River.

Port Noarlunga was the original town centre prior to Noarlunga Centre being constructed.

Noarlunga English adaptation of the kaurna name has also been spelt as Nglungga. 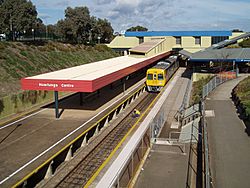 In Noarlunga Centre, just near Centro Colonnades, is the Noarlunga Centre Interchange, providing numerous bus links to anywhere in the metro area, and a train station, to get to Adelaide by rail. The Southern Expressway also has an on/off ramp located in Noarlunga.

All content from Kiddle encyclopedia articles (including the article images and facts) can be freely used under Attribution-ShareAlike license, unless stated otherwise. Cite this article:
Noarlunga Centre, South Australia Facts for Kids. Kiddle Encyclopedia.