Not to be confused with Nowra 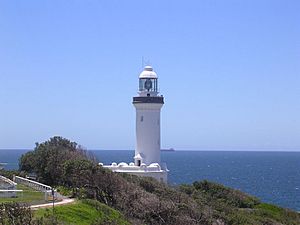 Norah Head, originally known as Bungaree Noragh Point, is a headland on the Central Coast, New South Wales, Australia, south of Newcastle and north of Sydney. The nearest town is Toukley. The place is home to a lighthouse with scenic views, which is also considered a venue for weddings. The Norah Head tidal rock pool next to the Cabbage Tree harbour is a popular destination for families with young children due to its sheltered location.

The Norah Head Lighthouse was the last significant lighthouse built in New South Wales, a 27 m tower, completed in 1903 with monetary assistance /Hargraves of Noraville after considerable numbers of ships foundered on the coast near the headland. Originally it was powered by a kerosene concentric wick lamp and still today it features a 2nd order bivalve Fresnel lens prism floating on a mercury bath. At first, the prism was rotated by descending weights, but the light was electrified in 1961 and fully automated in 1995. The light flashes once in 15 seconds, and is visible to 27 nautical miles (50 km), the focal plane is located at 46 m above sea level. For coastal shipping, two additional light signals are shown: a red light in the northeast sector, emitted from 39 m above the sea and a green one towards southwest, emitted from 44 m; both are continuous.

The former lighthouse keepers cottage (Head Keeper's separate cottage and two assistants semi-detached quarters) are maintained, and two of these are available for rent.

Near the head, sea battles between the Japanese Navy and Merchant navy ships took place in World War II: Three ships were sunk, Nimbin (1052 tonnes) by a mine on 5 December 1940 and the fishing trawler Millimumul sank with the loss of seven men on 26 March 1941 when it trawled up a German mine laid by the mine ship Pinguin, as well as BHP's Iron Chieftain (4812 tonnes) by a submarine on 3 June 1942. The Age (4775 tonnes) was also attacked on 3 June 1942.

There are several unique landforms around the head. Immediately in front of the head there is a rock platform which was formed in the Permian to Triassic periods around 180 - 280 million years ago. In the platform there is a volcanic intrusion, a channel of darker rock running from one side of the platform to the other. The intrusion was created by waves quarrying a softer basalt lava flow out of the surrounding granite. The lava came from an ancient volcano, probably Mount Warrawolong to the west.

All content from Kiddle encyclopedia articles (including the article images and facts) can be freely used under Attribution-ShareAlike license, unless stated otherwise. Cite this article:
Norah Head, New South Wales Facts for Kids. Kiddle Encyclopedia.