The first NASL had teams in the United States and Canada, and was the top level of the sport in both countries. It played between 1968 and 1984.

The second NASL began play on April 9, 2011 with teams in the U.S., Canada, and Puerto Rico. It is the second level of the soccer pyramid in both the U.S. and Canada, behind Major League Soccer. Puerto Rico has its own soccer league, but it plays at a level below the NASL. 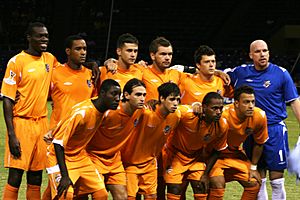 At that time the NASL was the top league in the league pyramid.

The most successful team in the old NASL were New York Cosmos with five titles.

All content from Kiddle encyclopedia articles (including the article images and facts) can be freely used under Attribution-ShareAlike license, unless stated otherwise. Cite this article:
North American Soccer League Facts for Kids. Kiddle Encyclopedia.