North Bethesda is an unincorporated, census-designated place in Montgomery County, Maryland, United States, located just north-west of the U.S. capital of Washington, D.C. It had a population of 50,094 as of the 2020 census. Among its 14 neighborhoods, the centrally-located, urbanizing district of White Flint is the commercial and residential hub of North Bethesda. The Pike & Rose development and the Pike District is an initiative of Montgomery County to brand and market this region as "North Bethesda's Urban Core". The WMATA White Flint metro station and Grosvenor-Strathmore metro station serve the region.

Four of the National Institutes of Health as well other federal agencies, including the Nuclear Regulatory Commission, the Health Resources and Services Administration, and the United States Public Health Service Commissioned Corps, are headquartered in North Bethesda. A number of corporate headquarters are headquartered in North Bethesda, as well as nonprofits such as the American Kidney Fund, the Society of American Foresters and United States Pharmacopeia (USP).

The region is also known for a number of its long-standing institutions, such as the Neo-Georgian Mansion at Strathmore and the Georgetown Preparatory School. The Music Center at Strathmore is also located in North Bethesda.

According to the United States Census Bureau, the North Bethesda CDP has a total area of 8.9 square miles (23 km2).

Significant through-roads in North Bethesda include Interstates 270 and 495 and Maryland State Highways 187 (Old Georgetown Road), 355 (Rockville Pike), and 547 (Strathmore Avenue). The Twinbrook, White Flint, and Grosvenor-Strathmore Washington Metro stations all serve the area, as does the Ride On bus system.

The far southern edge of the North Bethesda CDP was originally the country estate of the Grosvenor family, whose lineage includes Alexander Graham Bell and a former President of the National Geographic Society. That region continues to bear the family's name, and is the location of the headquarters of the Renewable Natural Resources Foundation. Also in the southern sector of the census designated area, located in the triangle between the two limbs of I-270 and I-495, is a business district that includes the corporate headquarters of Lockheed Martin, Coventry Healthcare, Host Marriott and Marriott International. The Nuclear Regulatory Commission, a government agency that oversees nuclear regulation and safety in the U.S., is also headquartered here. Major shopping centers include Congressional Plaza, Pike & Rose (formerly Mid-Pike Plaza), Montrose Crossing, Federal Plaza, and Wintergreen Plaza. White Flint Mall, demolished in 2016, was also a major shopping center.

North Bethesda shares a common history with most of its Montgomery County neighbors. Archaeological evidence suggests that Paleo, Archaic, and Woodland Native Americans lived nearby, along the banks of the Potomac River. These peoples traveled along an ancient route known as the Seneca Trail (which is today approximately followed in North Bethesda by Old Georgetown Road). Like many ancient roads, the Seneca Trail followed a ridge line – in this case, the high ground between the Potomac River and Rock Creek. Much later, development would spring up along this route.

The recorded history of the area commences with the colonial era. Settlements formed along Rock Creek and the Seneca Trail in the 17th Century, with recorded land grants in this area known originally as “Dan” and “Leeke Forest.” 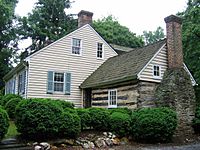 The Riley plantation house and kitchen, located in the Tilden Woods neighborhood on Old Georgetown Road

In the early 19th century, much of the area was part of a 3,700-acre (15 km2) tobacco plantation owned by a slaveowning family with the surname of Riley. One of the Rileys' slaves, Josiah Henson, is thought by historians to be the inspiration for Harriet Beecher Stowe's Uncle Tom's Cabin. In 1806, the Washington Turnpike Company was chartered to improve the old Seneca route, by then known as the Georgetown-Frederick Road. The road was opened in 1828, but had nearly washed away by 1848. The Riley plantation house was located on this road, and the plantation house's kitchen (in which Henson is known to have slept) still stands near the course of this road.

By the late 19th century, the area was privileged with stops along a train route, and by the early 20th century with its own trolley tracks on the line connecting Georgetown and Rockville (along current-day Fleming Avenue). During this time, development bloomed around train and trolley stops, and a number of wealthy families, including those of Captain James Frederick Oyster and Charles I. Corby (who developed methods that revolutionized the baking industry), lived or summered in the area. Nonetheless, the area remained sparsely populated through the 1920s.

The arrival of the automobile eventually transformed the area into a commuter suburb of Washington, D.C. By the 1950s, the area had sprouted a number of developer-conceived neighborhoods with tract houses for the middle-class.

Today, the area remains largely a commuter suburb, with most residents traveling an average of 29 minutes to their workplace. While some traditional neighborhoods remain, other areas have struggled with issues related to suburban sprawl. Like most other suburbs in Montgomery County, the Maryland-National Capital Park and Planning Commission (M-NCPPC) engages in master planning for all development. The White Flint Master Plan is designed to alleviate negative aspects of future high-density development in North Bethesda.

Neighborhoods within the North Bethesda CDP include the following:

In 2018, the e-commerce giant Amazon named Montgomery County, Maryland as one of its top 20 cities considered in the final running for its second headquarter. White Flint was rumored to be the proposed site if it were to be selected. In late 2018, Amazon announced that the headquarter would be split into two locations in New York and Virginia.

White Flint Mall was for decades a major retail mall here while Pike & Rose nearby is a major new mixed-use development designated by local planning authorities as a dense hub of offices, retail, hotels, residential and entertainment for the area. 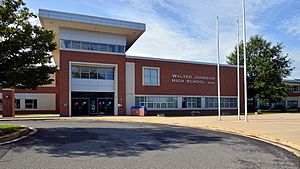 Catholic schools (under the Roman Catholic Archdiocese of Washington) include:

Other private schools in the CDP include:

The Washington Japanese Language School (WJLS, ワシントン日本語学校 Washington Nihongo Gakkō), a supplementary weekend Japanese school, has its school office at Quinn Hall of the Holy Cross Church in North Bethesda, adjacent to Garrett Park. The WJLS holds its classes in Bethesda. The institution, giving supplemental education to Japanese-speaking children in the Washington DC area, was founded in 1958, making it the oldest Japanese government-sponsored supplementary school in the U.S. It previously held classes at Holy Cross Church Elementary and Georgetown Preparatory School in North Bethesda.

The French International School, Lycee Rochambeau, is also located near the region.

All content from Kiddle encyclopedia articles (including the article images and facts) can be freely used under Attribution-ShareAlike license, unless stated otherwise. Cite this article:
North Bethesda, Maryland Facts for Kids. Kiddle Encyclopedia.