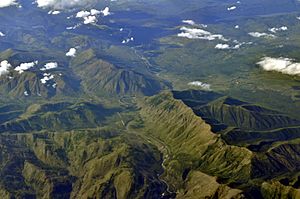 Aerial view of North Fork Flathead River (August 2013), roughly from the south. The river runs roughly from top center to bottom center. The transverse portion of the river near the middle of the image is south of Demers Ridge.

The river originates in a valley northeast of Lake Koocanusa in the Clark Range, and flows west. It then meets the Continental Divide and turns south, winding through a broad glacial valley. The river then crosses the Canada–US border into the state of Montana, where it begins to delineate the western boundary of Glacier National Park. Roughly following the "inner" and "outer" North Fork Roads and Montana Secondary Highway 486, the river winds southwest past Kintla Lake, Bowman Lake, Quartz Lake, Logging Lake, and Lake McDonald, then turns west and south into a narrower valley before joining the Middle Fork Flathead River near the southwestern entrance of the national park, several miles northeast of Columbia Falls. Less than 6 miles (9.7 km) below this confluence, the combined river joins the South Fork Flathead River, forming the main Flathead River.

Although the North Fork is designated as a National Wild and Scenic River (1975) in the United States, its greater length in BC (31 miles (50 km), not including headwaters forks) is not. Water in the BC section remains relatively pure as there are no permanent residents or livestock in this drainage north of the border.

In the 1940s the Glacier View Dam was proposed, which would have flooded much of the river's valley between Glacier View Mountain and the Canada–US border. Supported by Flathead Valley interests, the dam and reservoir were opposed by the National Park Service, as between 10,000 acres (4,000 ha) and 20,000 acres (8,100 ha) of park lands would have been flooded. The proposed dam was cancelled by 1950.

All content from Kiddle encyclopedia articles (including the article images and facts) can be freely used under Attribution-ShareAlike license, unless stated otherwise. Cite this article:
North Fork Flathead River Facts for Kids. Kiddle Encyclopedia.