The Northern Cardinal (Cardinalis cardinalis) is a member of the cardinal family of birds in North America. The bird's name comes from the red-robed Roman Catholic Cardinals. Its crested head is also said to resemble a bishop's mitre. Cardinals have been also referred to as redbirds and Virginia nightingales. Cardinals were once popular cage birds for their bright color and rich, varied songs. 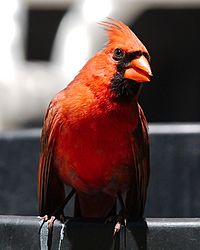 Males are bright, deep red with black faces and coral/red beaks. Females are a fawn/light brown color, with mostly grayish-brown tones & slight reddish tint in their wings and tail feathers, also with a bright coral/red beak. Both possess prominent raised crests and strong beaks. Young birds (male & female) are the color of a mother bird until the fall, when they will molt and grow their adult feathers.

Cardinals eat mostly seeds, fruits, small animals, and insects. They seem to especially like peanuts (unsalted). Cardinals are almost always seen in pairs; if one is seen, its mate will usually be nearby. Nestlings are fed insects by the parents. Both the mother and father raise the birds for the first 10 days, and during the next 10 days the father bird feeds the babies. At this point, the baby birds are considered fledglings, and can flutter among brush on the ground, but the parents still feed them until they are old enough to feed themselves.

Northern cardinals are preyed upon by a wide variety of predators native to North America, including falcons, hawks, shrikes, bald eagles, golden eagles and owls. Predators of chicks and eggs include snakes, blue jays, crows, squirrels, chipmunks, and domestic cats. 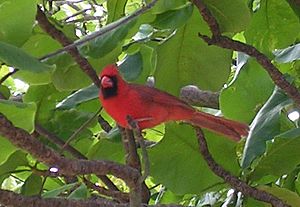 Northern Cardinal on the Island of Kauai, Hawaii

Cardinals are abundant across the eastern United States from Maine to Texas and in Canada in the provinces of Ontario, Quebec, and Nova Scotia. Their range extends west to the U.S.-Mexico border and south through Mexico to the Isthmus of Tehuantepec, northern Guatemala, and northern Belize. They were introduced to Bermuda in 1700. They have also been introduced in Hawaii, and Southern California. Their natural habitats are woodlands, suburbs, gardens, swamps and thickets. 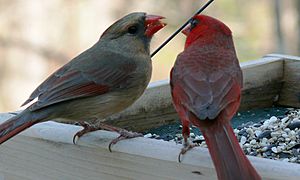 The male often feeds the female as part of their courtship behavior.

Cardinals are a territorial song bird, meaning they mark and defend their territory with their song and whistle. The male sings in a loud, clear whistle from a tree top or other high location to defend his territory. He will chase off other males entering his territory. The pair sometimes sing together before nesting and the male may feed his mate. The female builds a cup nest in a well-concealed spot in dense shrub or a low tree. Both feed the young. Young fledged cardinals resemble adult females in coloring. The male will grow in bright red feathers as he matures and is eventually chased away by his sire.

These birds are permanent residents throughout their range, although they may relocate to avoid extreme weather or if food is scarce.

Cardinals learn their songs, and as a result the songs vary regionally. Cardinals are able to easily distinguish the gender of a singing cardinal by its song alone. Interestingly, however, male cardinals can learn songs from female cardinals, and vice versa, suggesting that differences in song between the sexes may be due to hormonal differences and not learning.

The northern cardinal is found in residential areas throughout its range. Backyard birders attract it using feeders containing seeds, particularly sunflower seeds and safflower seeds. An increase in backyard feeding by humans has generally been beneficial to this species.

In the United States, this species receives special legal protection under the Migratory Bird Treaty Act of 1918, which also banned their sale as cage birds.

It is also protected by the Convention for the Protection of Migratory Birds in Canada.

It is illegal to take, kill, or possess northern cardinals, and violation of the law is punishable by a fine of up to US$15,000 and imprisonment of up to six months.

The northern cardinal is the state bird of seven U.S. states, more than any other species: Illinois, Indiana, Kentucky, North Carolina, Ohio, Virginia, and West Virginia; although in each case the particular state just refers to the bird as "cardinal". It was also a candidate to become the state bird of Delaware, but lost to the Delaware Blue Hen.

Stanford University's nickname, the (singular) Cardinal, is a reference to the color, not the bird.

All content from Kiddle encyclopedia articles (including the article images and facts) can be freely used under Attribution-ShareAlike license, unless stated otherwise. Cite this article:
Cardinal (bird) Facts for Kids. Kiddle Encyclopedia.