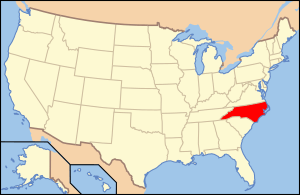 The first symbol was the Seal of North Carolina, which was made official in 1871. The original seal also contained the future state motto. It served as the state's only emblem for 14 years until the adoption of the state flag in 1885. Enacted by law in 2013, the newest symbols of North Carolina are the state art medium, clay; the state fossil, the Megalodon teeth; the state frog, the Pine Barrens tree frog; the state marsupial, the Virginia opossum; and the state salamander, the Marbled salamander.

All content from Kiddle encyclopedia articles (including the article images and facts) can be freely used under Attribution-ShareAlike license, unless stated otherwise. Cite this article:
List of North Carolina state symbols Facts for Kids. Kiddle Encyclopedia.