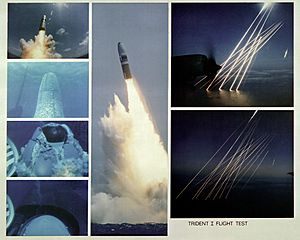 Montage of an inert test of a United States Trident SLBM (submarine launched ballistic missile), from submerged to the terminal, or re-entry phase, of the multiple independently targetable reentry vehicles

Nuclear missiles are missiles (rockets that land on the earth or hit something in the air, the water, or whatever) with atomic bombs inside.

In the time of Cold War the USA and the Soviet Union were enemies and thought the other side was going to attack them. To dissuade the other side from attacking, both sides built many nuclear missiles to ensure Mutual assured destruction. This meant a country that attacked would be destroyed. Treaties were made to reduce the numbers of missiles to make everyone safer.

All content from Kiddle encyclopedia articles (including the article images and facts) can be freely used under Attribution-ShareAlike license, unless stated otherwise. Cite this article:
Nuclear missile Facts for Kids. Kiddle Encyclopedia.