Ofu and Olosega are parts of a volcanic doublet in the Manu‘a Island Group, which is part of American Samoa in the Samoan Islands. These twin islands, formed from shield volcanoes, have a combined length of 6 km and a combined area of 12 square kilometers (5 square miles). Together, they have a population of about 500 people. Geographically, the islands are volcanic remnants separated by the narrow, 137-meter-wide (449-foot)) Āsaga Strait, composed of shallow-water coral reef. Before 1970, people crossed between the two islands by waiting until low tide and then wading across the shallow water of the strait. Since 1970, there has been a bridge over the strait, providing a single-lane road that connects the two islands.

Pre-historic artifacts discovered on Ofu by archaeological field work in the 1980s significantly furthered understanding of the ancient history of Ofu in particular, and the Samoa Islands and Polynesia in general. The artifacts include ceramics, adzes, and worked shell and bone pieces. Samples of red-slipped plainware ceramics were found that appear to have been crafted in the tradition of the Lapita culture. The field work, carried out by a team that included Pacific archaeology specialist Patrick Vinton Kirch, focused on a site called To'aga (site AS-13-1), a 2 km (1.2 mi) coastal stretch on the south coast of Ofu. Dating of the artifacts suggested that Ofu has been continuously inhabited by humans for about 3,000 years. 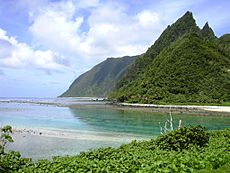 South shore of Ofu seen from Olosega across the narrow strait that separates them. The sharp peak, an eroding dike complex, is named Sunu‘itao.

Ofu is the western part of the volcanic outcrop of Ofu-Olosega Island and the westernmost of the Manu'a Islands. The main village of Ofu is located on the western shore, protected behind an offshore islet (eroded tuff cone) known as Nu'utele. Ofu has a small airport (IATA: OFU, ICAO: NSAS) and a boat harbor that serve the population on Ofu and Olosega. The weekly flight from Pago Pago takes about half an hour. 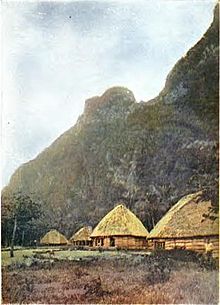 Most of the southern shore and associated coral reef are part of the National Park of American Samoa. In 2005 the U.S. National Park Service was negotiating with village councils on Olosega to expand the park around that island.

Situated on the south coast of the island is To'aga lagoon which has a high diversity of corals and fishes. The marine site has been part of long term research and study on coral reefs and global climate change.

The island is also home to the Samoa Flying-fox (Pteropus samoensis), a species of bat threatened by habitat loss. 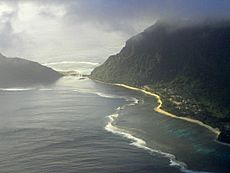 Aerial view - Olosega village on the right, Ofu on the left. Both islands are connected via a single-lane bridge, crossing the Asaga strait.

Olosega is the smallest island in Manu'a. It is possible to walk across to Ofu Island at low tide.

Olosega Island is a remnant of the Sili shield volcano, the caldera of which may lie submerged off the north shore.

The volcanic eruption of 1866 was actually 3 km (1.9 mi) east of Olosega, on a submarine ridge that extends east southeast to nearby Ta‘ū.

All content from Kiddle encyclopedia articles (including the article images and facts) can be freely used under Attribution-ShareAlike license, unless stated otherwise. Cite this article:
Ofu-Olosega Facts for Kids. Kiddle Encyclopedia.