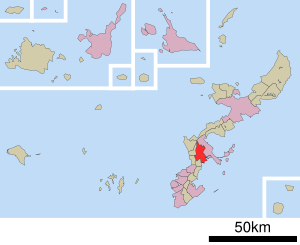 Okinawa (沖縄市code: ja is deprecated , Okinawa-shi, Okinawan: Uchinaa) is a Japanese city in Okinawa Prefecture on the island of Okinawa.

In 1908, Okinawa Prefecture established the villages of Goeku and Misato. During the occupation of Japan, the U.S. military government established the city of Koza (コザ市code: ja is deprecated , Koza-shi) in Goeku.

In 1974, the city of Okinawa was created by the merger of Misato and Koza.

the city of Okinawa is located in the central part of the island of Okinawa. It is about 20 km north of Naha.

In the prefecture, it is the second-largest city after Naha.

There is a United States military base which is partly in the city. It is Kadena Air Base.

All content from Kiddle encyclopedia articles (including the article images and facts) can be freely used under Attribution-ShareAlike license, unless stated otherwise. Cite this article:
Okinawa, Okinawa Facts for Kids. Kiddle Encyclopedia.