Kids Encyclopedia Facts
Not to be confused with Market Square (disambiguation). 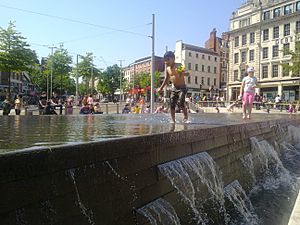 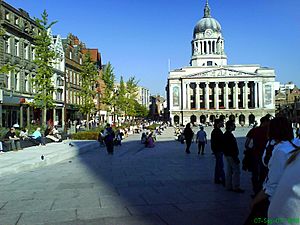 Nottingham Council House from the square 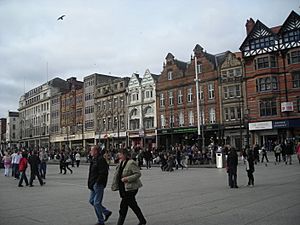 The Old Market Square is an open, pedestrianised city square in Nottingham, England. It is the largest such surviving square in the United Kingdom, forming the heart of the city, and covering an area of approximately 22,000 m².

Located in the heart of Nottingham City Centre, the square is bounded by Beastmarket Hill to the West, Smithy Row to the North, and South Parade to the South. The Eastern end of the square is dominated by the Council House, which serves as Nottingham's city hall.

The nature of the square means it is often used for large local events, fairs, concerts and exhibitions.

The square has long been at the centre of Nottingham life. In the early days before the City of Nottingham was formed, the area was the centre-point between the Norman town of Nottingham, situated around the Castle Rock, and the old Anglo-Saxon town which was based around the current Lace Market at St. Mary's Church, also called Snothryngham, Snottingaham or Snottingham. The central point between the two towns became a major market point, and hence the square has been at the centre of Nottingham's growth around it for hundreds of years since. The two towns were once divided by a wall. The old positioning of this historic wall was reinstated when the square was redesigned in the 2000s, with a stainless steel drainage channel down the centre of the Square. This marks the Wall that divide the Livestock from the Agricultural feed & Foodstuffs.

The square was the original setting of Nottingham Goose Fair, an annual fair held in October originating over 700 years ago. The Goose Fair was moved in 1928 for redevelopment of the square.

The square was the location of Smith's Bank which, established in 1688, was the earliest provincial bank in England. Its successor, the National Westminster Bank, is still located in the same premises.

When the Nottingham Exchange was demolished and the new Nottingham Council House built, the Square was redesigned in 1927 with several platforms creating a central procession way. However, the decline in the quality, changes in function, and issues surrounding disabled access spurred a City Council-led international redevelopment competition in 2003 known as Square One.

Previously, the Square has been affectionately nicknamed 'Slab Square', owing to the high numbers of concrete paving slabs that made the former Square. There was a mosaic of the city coat of arms in front of the Council House on the square. This fell into a state of dis-repair before the redesign.

Construction of the new design cost 17 million pounds. Work began there in 2005. The Square was scheduled to reopen before the end of 2006, but following delays reopened in March 2007.

Historically the Square forms a meeting place for the people of Nottingham and is also the location for local events, civic protests, royal visits, celebrations, and public mourning. A number of Nottingham's defining moments have taken place in the Square.

One of the most significant civil protests to start here was the protest by Luddites (a social movement of British textile artisans) in the early nineteenth century, who protested growth in industrial machinery which was seen to be taking jobs. This protest eventually led to major destruction of the medieval Nottingham Castle. Trophies won by Nottingham Forest Football Club including the European Cup and the FA Cup have all been held aloft in front of crowds here. Nottingham ice dance legends Torvill and Dean also stood on the Council House balcony following their famous Olympic Triumph. In 2004, a memorial service to remember the life of Nottingham Forest's former manager Brian Clough was held there in front of national television cameras and thousands of local football supporters. A statue of Brian Clough is located just off the square at the junction of King and Queen Street.

As well as many shops, bars and department stores, the Square is also home to the Nottingham City Transport Travel Centre. The city tourist information centre and Nottinghamshire Angel Row central library are also both just near the Square. The Bell Inn, thought to be one of the UK's oldest pubs dating back to around 1276, also sits at the back of the Square. 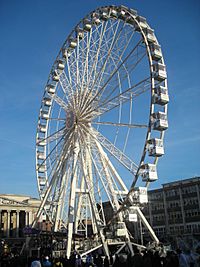 Folklore has it that it was in the Market Square where outlaw Robin Hood took advantage of an amnesty and won the coveted silver arrow in a contest devised by the Sheriff of Nottingham. This contest forms the central plot to the Disney version of Robin Hood.

In February 2008, a Ferris wheel was installed in Market Square. The wheel was nicknamed the Nottingham Eye and this name was adopted by the owners, however it was changed to the Wheel of Nottingham after legal pressure from the owners of the London Eye. At 60 metres tall, the wheel provided panoramic views of the city and was the centre piece of Nottingham City Council's "Light Night". 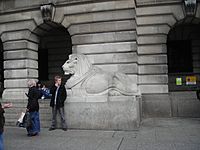 One of the stone lions, a popular meeting place 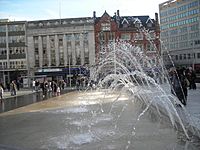 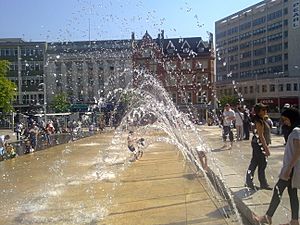 Two large stone lions guard the Council House steps, and they have historically been a popular symbol of the city, with the City Council recently adopting the lion on some of its recent 'Nottingham Proud' campaign posters. The 'Left Lion' has long since been adopted by locals as a meeting place. There are alternative 'names' attached to them, some people call them "Lennie and Ronnie", "Menelaus and Agamemnon", others "Leo and Oscar".

Since the 1927 design of the square, there have been water fountains present. Two fountains flanked the central procession and were in the centre of individual square pools. These remained until the redesign by Kathryn Gustafson was completed in 2007, when a new fountain and water feature was added towards the top end of the square.

On the southern side of the Market Square, along South Parade, is Nottingham Express Transit’s Old Market Square tram stop. The two tram lines run in both directions, skirting around the edge of the main square from Market Street in the north west and along South Parade towards Hockley. The Market Square was once at the heart of the city's road network; today it is closed to all traffic except buses along Beast Market Hill and the tram.

On 22 February 2009 Nottingham’s Speaker's Corner was officially opened by Jack Straw (at the time, UK Justice Secretary). It was the first official Speakers’ Corner outside London. It is located on a new extension to the Market Square, which was added at the junction of King Street and Queen Street; with landscaping, planting, and a new memorial to Brian Clough. Due in part to the success of the Nottingham corner, there are new plans for similar projects in Lichfield and Prague. 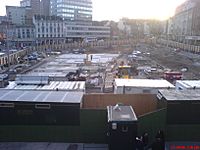 Redesigned by Gustafson Porter in 2004 and completed in March 2007, the Old Market Square renovations cost taxpayers around 17 million pounds. Not a single building was erected or demolished; the majority of the money was spent on granite paving stones and is built with three shades of granite. The central open space is a light coloured granite, with white, beige and dark grey granite used for the fountains, terraces and flowerbeds. The final slab prior to the reopening was laid by the Lord Mayor.

The new square is a single tier area, including the recreation of an ancient border which once divided Nottingham. A new water feature dominates the west side of the Square, with jet fountains and waterfalls.

The square was designed to host public events and since the opening in 2007 a variety of successful events have been held including concerts and parades, May Day and St Georges Day celebrations, cycling events, and a regular local farmers market.

All content from Kiddle encyclopedia articles (including the article images and facts) can be freely used under Attribution-ShareAlike license, unless stated otherwise. Cite this article:
Old Market Square Facts for Kids. Kiddle Encyclopedia.