Nottingham Council House is the city hall of Nottingham, England. The iconic 200 feet (61 m) high dome that rises above the city is the centrepiece of the skyline and presides over the Old Market Square(also referred to as the City Center).

The Council House was designed by Thomas Cecil Howitt and built between 1927 and 1929 in the Neo-Baroque style characterised by the huge pillars that circle the building along with the carvings on the facade. It replaced the former Nottingham Exchange.

Housed within the dome the affectionately-nicknamed ‘Little John’ hour bell – for many years the deepest toned clock bell in the United Kingdom, weighing over 10 tonnes (10 t) – whose strike can be heard for a distance of seven miles. 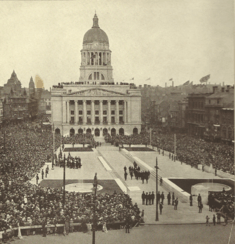 Scene in the Old Market Square for the official opening of the Council House, 22 May 1929

The foundation stone (behind the left-hand lion as you approach the building) was laid by Alderman Herbert Bowles (Chairman of the Estates Committee), on 17 March 1927. The building was officially opened by the Prince of Wales (later King Edward VIII and the Duke of Windsor) on 22 May 1929. The total cost of the building at the time was £502,876 (21920000). By the time the bill was finally cleared in 1981, the total including interest was £620,294.

The building has staged many high-profile occasions; royalty, statesmen and women and stars of the stage and screen have been entertained there and both the F.A. and European Cups have been held aloft from its balcony.

Since Nottingham City Council relocated councillors’ offices to Loxley House in 2010, the Council House is seldom used for day-to-day administrative functions. From April 2011, the building also now serves as the chief Register Office for Births, Marriages and Deaths in the City.

The Council House and Exchange Buildings (to the rear) are constructed of Portland Stone from the same quarry used by Sir Christopher Wren for St. Paul's Cathedral in London. The keystone of the central arch in the entrance arcade was salvaged from a London church after the Great Fire of 1666, but lay unused for centuries on a Dorset beach.

The terrace overlooking the Old Market Square has eight massive columns, above are 21 figures representing the activities of the Council, also modelled by Joseph Else, principal of the Nottingham School of Art. The frieze behind depicts traditional local crafts such as bell founding, mining and alabaster carving. 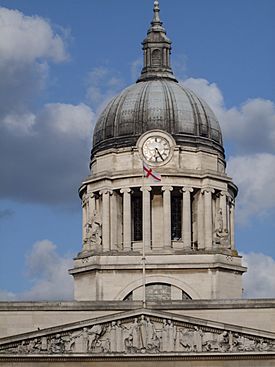 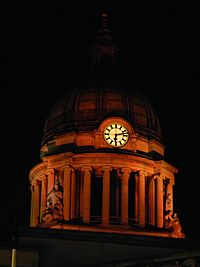 The most striking visual element of the building, and in itself an iconic symbol of the City.

The golden ball on the very top of the dome stands 200 feet (61 m) above the Old Market Square below.

Apart from Little John, the famous bell and its clock mechanism which was manufactured and installed by William W. Cope of the famous Cope clockmaking family, the dome also contains water tanks (used for fire-prevention sprinkler systems).

The dome continues to dominate Nottingham’s skyline, and planning procedures are in place to preserve this unique aspect of the City. For many years the dome has been illuminated (often in alternating colours), making it a welcoming point for Nottingham’s nightlife.

The ground floor is predominantly an upmarket fashion-dominated shopping mall – now called ‘The Exchange’ in honour of the Nottingham Exchange – having had an image makeover in 2005. The original name of Exchange Arcade is still used by many local people however. Retailing space was included in the design to fund the Corporation’s construction of the building, during the Great Depression and remained under council control until sold in 1985 and redeveloped as a shopping centre. This part of the building has been in private hands since that time, and is currently owned by a Pension Fund. Each shop has its own basement showroom or storage facilities, deliveries being made via an underground roadway, served by a vehicular lift on Cheapside. This service area was originally the fresh produce hall, and received natural light via pavement lights in the floor of the arcade above. The locations of those lights can still be seen, marked by the 1985-vintage terracotta tile strips which replaced them, interspersed between the York stone paving slabs. The paved areas were replaced in 2014 with identical York stone (sourced from the Rotherham area after technical advice from the British Geological Survey) at a cost of over £140,000. The upper floors of the Exchange Arcade house council offices.

• The Danes capturing Nottingham in 868:
• William the Conqueror ordering the building of the castle in 1068;
• Robin Hood and his Merry Men;
• King Charles I raising his standard at the start of the Civil War in 1642.

Each mural was the work of local artist Noel Denholm Davis. The artist used local celebrities as models. Thus T. Cecil Howitt himself appears in the guise of William the Conqueror’s surveyor, and Notts County F.C. goalkeeper Albert Iremonger as Little John. The inscription around the base of the dome reads: “The Corporation of Nottingham erected this building for counsel and welcome, and to show merchandise and crafts”.

Detail of sculpture on principal facade, showing a model of the Council House

Detail of sculpture on principal facade, showing statue of Justice

Much of the external statuary is by Joseph Else (1875–1955), Principal of the Nottingham School of Art (now part of Nottingham Trent University). Else was responsible for the famous lions guarding the entrance, for the frieze above the Ballroom windows (representing ancient local industries such as bellfounding and alabaster) and for the figures in the principal façade’s pediment (depicting the arts and public service). A pub overlooking the Square is now named after Else. 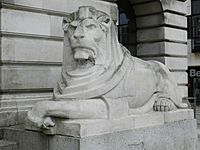 Created by Joseph Else, the 2 tonnes (2.0 t) art-deco lions stand guard on either side of the entrance steps. They are similar in design to the lions used to publicise the Wembley British Empire Exhibition in 1924–25. There are alternative names attached to them: some people call them “Menelaus and Agamemnon”, others “Leo and Oscar”.

Whatever their names, arranging to meet “at The Lions” has become a notable part of Nottinghamian life since the building opened.

Sculpture Groups around the Dome

These groups were created by Joseph Else and three former students of the School of Art. All the sculptors were born and raised in Nottingham.

Howitt himself was in no doubt that the use of classical lines would mean that it would not look dated in a few years’ time.

A scathing criticism came from Nikolaus Pevsner in his Buildings of England: Nottinghamshire (published in 1951);

“Not much can be said in defence of this kind of neo-Baroque display at a date when the Stockholm Town Hall was complete and a style congenial to the C20 established. Wren has to answer for much, once the connection between Greenwich and this dome (via the Old Bailey?) is noted. The Ionic columniation is no more inspiring or truthful than the interiors. The only positive interest lies in the plan of the building. Its centre is a shopping arcade of great height with a glass roof, and shops run all along the ground floor on the N and S sides.”

All content from Kiddle encyclopedia articles (including the article images and facts) can be freely used under Attribution-ShareAlike license, unless stated otherwise. Cite this article:
Nottingham Council House Facts for Kids. Kiddle Encyclopedia.