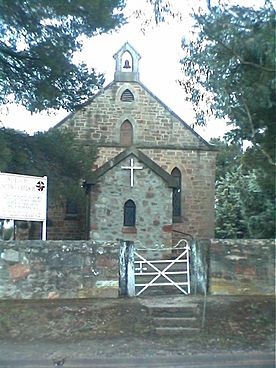 One Tree Hill is a town on the outskirts of Adelaide, South Australia. It is located in the City of Playford.

The town takes its name from the 'One Tree Hill Inn' (licensed in 1851), for many years the meeting place of the District Council of Munno Para. The inn's name, in turn, referred to a giant red gum tree which stood on the intersection of Black Top Road and Walters Road. The tree burnt down in 1890 and was cut down in 1934 and replaced with 5 trees which can still be seen today.

The Kaurna people were the indigenous inhabitants of the Adelaide region, which includes One Tree Hill. The Peramangk people, living further inland, visited the area from time to time, chiefly in the warmer parts of the year. This was due to the area being cooler and better watered than the plains. The hills at this time were well wooded with tree species that had been in the area for around 6000 years. Along the rivers and creeks and wide valleys could be found tall, heavy eucalypts, many of which had wide, hollowed bases large enough for the Aboriginals to use as shelters. There were many such shelter trees in use by the Kaurna and Peramangk as late as the 1840s, and evidence exists that they hunted and gathered in the woodlands and grasslands for many generations prior to European settlement. Unfortunately, the community declined soon after European settlement, and most of what we know about them today comes from the few artifacts and sparse archaeological evidence that they left behind.

Europeans settled the area in the early 1840s, and the township commenced in 1851 with the building of the One Tree Hill Inn. The settlement was located in a strategic location, being close to several larger towns (such as Gawler and Salisbury) with facilities, and became the meeting place of the surrounding rural community, including Gould Creek and Uleybury. A post office and general store were built in 1858 which featured a large cellar where produce including local wine was sold. In 1906, the Institute, which cost about £600, was built across the road from the post office, and became a town meeting place and recreation centre, which was expanded considerably in 1978.

The Para Wirra Conservation Park is north-east of the town.

There is no specific provision for bicycles on any of the local roads. There are footpaths on most roads within the town and along Black Top Road in some sections up three kilometres west of the town using land from the old alignment of the road.

The town is serviced by the following main roads:

The area is not serviced by Adelaide public transport; the nearest service is an Adelaide Metro bus route at Craigmore, five kilometres to the west of the town.

From the commencement of a Bowman's bus service around 1937 until Friday 14 May 1982, a daily bus service ran from the township to Adelaide via Golden Grove and North East Road (Route 540E). Before that the nearest transport was at Smithfield Railway Station.

All content from Kiddle encyclopedia articles (including the article images and facts) can be freely used under Attribution-ShareAlike license, unless stated otherwise. Cite this article:
One Tree Hill, South Australia Facts for Kids. Kiddle Encyclopedia.