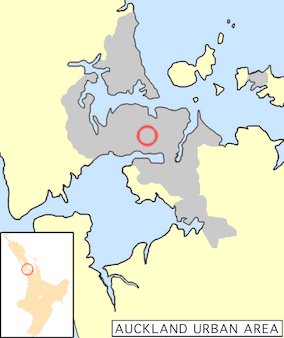 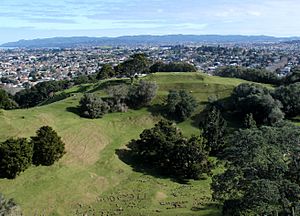 The hill's scoria cones were erupted from three craters – one is intact and two have been breached by lava flows that rafted away part of the side of the scoria cone. Lava flows went in all directions, many towards Onehunga, covering an area of 20 square kilometres (7.7 sq mi), making it the second largest (in area covered) of the Auckland volcanic field, behind Rangitoto Island. The age of eruption is currently unknown, but it is older than 28,500 years as it has a mantling of volcanic ash erupted at that time from Te Tātua-a-Riukiuta volcano.

Maungakiekie was the largest and most important Māori pā in pre-European times. The cone and its surroundings are estimated to have been home to a population of up to 5,000. At this time, the Nga Marama chief Kiwi Tamaki held the pa and used its strategic placement to exact tribute from travellers passing from Northland to the rest of the North Island through the rich isthmus. Its position between the Waitemata Harbour to the east (opening upon the Pacific Ocean) and the Manukau Harbour to the west (opening onto the Tasman Sea) offered a wide variety of seafood from the two harbours. The volcanic soil on the scoria cone was highly fertile, and the inhabitants terraced the slopes extensively. The hill was relatively easy to defend from raiding parties from other tribes due to its steep sides and imposing palisades. Waiohua occupation of the Māori pā ended around 1740-1750 AD when they were defeated in a war against the invading Ngati Whatua-o-Kaipara The pā was abandoned around 1795 AD with the death of Te Taou leader Tuperiri

The hilltop is always accessible by foot but because it became a nightly party stop for boy racers and other (often drunk) groups of youths after-dark road access to the summit was closed in 2008.

Because it is high and relatively central the city has long used One Tree Hill Domain for its potable water reservoirs. The first was constructed in 1900 atop the western peak and, while no longer in service, the small structure is still visible today. Five further reservoirs were subsequently built underground, the latest of which was completed in 1977. They are currently used to maintain supply to the Onehunga area and to the reservoirs atop Maungawhau / Mount Eden. 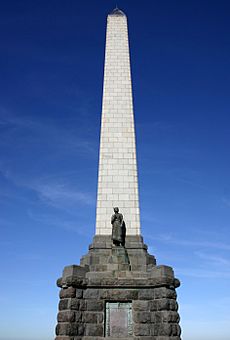 When Auckland was founded as a colonial town a tree stood near the summit which gave the hill its English name. Two accounts identify it as a pōhutukawa (Metrosideros excelsa). This tree was cut down by a white settler in 1852, in an act of vandalism in one account, or for firewood in another. It seems likely this was a different tree from the tōtara (Podocarpus totara) which, as a sacred tree, had given the hill one of its Maori names. A radiata pine was planted in the 1870s to replace the previous tōtara . John Logan Campbell repeatedly tried to grow native trees on the hill's summit, but the trees failed to survive - with only two pines, originally part of a shelter belt for the native trees, surviving for long. However, in 1960, one of the two was felled in another attack, possibly for firewood. 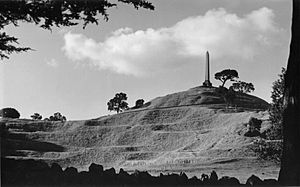 The remaining tree was later attacked twice with chainsaws by Māori activists to draw attention to injustices they believed the New Zealand government had inflicted upon Māori (as the tree was not a native New Zealand species, they considered it an appropriate target). The first attack happened on 28 October 1994, the anniversary of the 1835 Declaration of Independence. A second attack on 5 October 2000 left the tree unable to recover even though substantial efforts were made, and so it was removed on 26 October due to the risk of it collapsing. The chainsaw used in the first attack was later placed on sale on popular New Zealand auction site, TradeMe in 2007, but later withdrawn by the website after complaints and a poll of users. It was later listed on eBay.

All content from Kiddle encyclopedia articles (including the article images and facts) can be freely used under Attribution-ShareAlike license, unless stated otherwise. Cite this article:
One Tree Hill (New Zealand) Facts for Kids. Kiddle Encyclopedia.