Kids Encyclopedia Facts
Not to be confused with Orsay.

Orosay (Scottish Gaelic: Orasaigh) is a small uninhabited tidal island in the Sound of Barra lying at the north end of Traigh Mhòr, the ‘big beach’ on the north east coast of Barra. It is one of ten islands in the Sound of Barra, a Site of Community Importance for conservation in the Outer Hebrides of Scotland. It is about 30 hectares (74 acres) in extent and the highest point is 38 metres (125 ft). 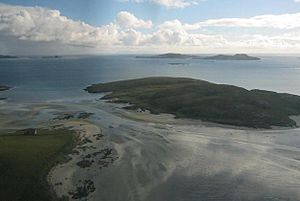 Inland, the nearest settlement is Eoligarry, separated from the island by the strait of Caolas Orasaigh (English: "Sound of Orosay"). The smaller beach of Tràigh Cille-bharra ("the beach of the church of Barra") lies to the north. The islands of Fuday, Greanamul, Gighay and Hellisay lie further offshore in the Sound of Barra. The name "Orosay" is a variant of "Oronsay", from the Old Norse for "tidal" or "ebb island", found commonly in the Hebrides. For example, there are two other small Orosay/Orosaighs surrounding Barra alone. One is at at the south eastern approaches to Castle Bay and the second at in Caolas Bhatarsaigh east of the causeway.

The writer Compton Mackenzie lived on Barra nearby and is buried at Cille Bharra, opposite the island. There is no record of Orosay itself ever having been permanently inhabited. 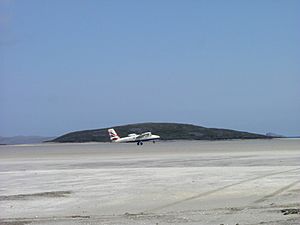 Orosay and the "runway" at Barra airport

Barra's airport uses Traigh Mhòr ("big beach"), also known as Cockle Strand, as a runway. Planes can only land and take off at low tide, and the timetable varies with the tides. Reputedly, this is the only airport in the world to have scheduled flights landing on a beach. The aircraft currently in operation on Barra is the de Havilland Canada DHC-6 Twin Otter, flown by Loganair on services to Glasgow and Benbecula. Traigh Mhòr also provides commercial cockle harvesting.

In the 1970s concern was expressed about the progressive deepening of Caolas Orasaigh as a possible cause of increased ponding of water on the beach runway at low tide. The problem does not, however, appear to have been serious and apparently no action was taken.

All content from Kiddle encyclopedia articles (including the article images and facts) can be freely used under Attribution-ShareAlike license, unless stated otherwise. Cite this article:
Orosay Facts for Kids. Kiddle Encyclopedia.