Whiteford Township is a civil township of Monroe County in the U.S. state of Michigan. The population was 4,602 at the 2012 census.

Whiteford Township was organized in March 1834 and carved out of western parts of Erie Township and the former Port Lawrence Township. It was named after Gen. David White, the township's first supervisor and a pioneer settler. At the time of founding, Whiteford Township was a much larger township in land area than it is today. It originally extended into present-day Ohio, when that part of the state (known as the Toledo Strip) was claimed by both Ohio and Michigan during the Toledo War. This larger Whiteford Township included most of present-day Sylvania, Sylvania Township, northern Springfield Township and a small section of present-day Toledo north of Airport Highway between Reynolds Road and Holland-Sylvania. However, by December 1836, the boundary dispute between Ohio and Michigan had been settled, the Toledo Strip was awarded to Ohio, and Whiteford Township subsequently lost all of its territory south of this newly agreed upon state boundary.

Throughout the mid and late 19th Century, most of the land in the township was used agriculturally with many of the square-mile sections divided up into parcels of 40 to 160 acres. In 1880, over 95% of the householders residing there were occupied as farmers or farm laborers. Merchants and manufacturers could be found in the unincorporated settlements of Whiteford Center and Ottawa Lake, the latter being home to a large stave mill in which residents were employed during the 1870s and 1880s.

In 1880, the total population of the township was 2044 of which 2030 residents were classified as White and 14 were listed as Black/Mulatto. By 1900 the population had risen to 2050, with all residents listed as White.

There were 1,582 households out of which 35.0% had children under the age of 18 living with them, 69.4% were married couples living together, 6.3% had a female householder with no husband present, and 21.4% were non-families. 18.1% of all households were made up of individuals and 6.3% had someone living alone who was 65 years of age or older. The average household size was 2.77 and the average family size was 3.17. 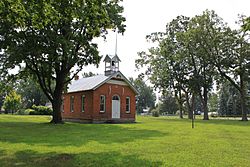 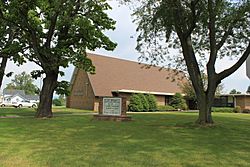 All content from Kiddle encyclopedia articles (including the article images and facts) can be freely used under Attribution-ShareAlike license, unless stated otherwise. Cite this article:
Whiteford Township, Michigan Facts for Kids. Kiddle Encyclopedia.