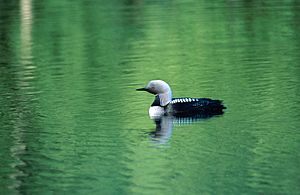 The Pacific loon or Pacific diver (Gavia pacifica), is a medium-sized member of the loon, or diver, family.

The Pacific loon, previously considered conspecific with the similar black-throated loon, was classified as a separate species in 1985. The genus name Gavia comes from the Latin for "sea mew", as used by ancient Roman naturalist Pliny the Elder. The specific epithet pacifica is Latin for the Pacific Ocean, the term meaning "peaceful".

Breeding adults are like a smaller sleeker version of common loon. They measure 58–74 cm (23–29 in) in length, 110–128 cm (43–50 in) in wingspan and weigh 1–2.5 kg (2.2–5.5 lb). They have a grey head, black throat, white underparts and chequered black-and-white mantle. The black throat has purple reflections. Non-breeding plumage is drabber with the chin and foreneck white. Its bill is grey or whitish and dagger-shaped.

In all plumages, lack of a white flank patch distinguishes this species from the otherwise very similar black-throated loon. The Pacific loon can be differentiated from the red-throated loon in winter by the latter's paler look, the fact that the red-throated loon has less of a contrast between both the crown and hindneck and the throat, and the bill that looks to be upturned.

Like other gaviiformes, the Pacific loon's legs are located towards the back of its body making it difficult for it to walk on land. The leg placement helps the loons efficiently forage for food underwater. The physiological structure of the Pacific loon makes taking off from land practically impossible, and the loon requires 30-50 yards on the water to successfully attain flight. This distance requirement for takeoff limits the number of lakes the Pacific loon can realistically breed and forage on.

The Pacific loon most actively calls in the spring and summer and has a wide range of calls. When feeding, the Pacific loon may produce an “ark”-like vocalization, a sharp, short call. Additionally, the Pacific loon has a call similar to that of its relative the common loon, it is a loud, eerie, oo-loo-lee wail or yodel that can travel for miles and is typically heard during the loon's breeding season. The loons can also make short and harsh “kok-kok-kok-kok” calls along with a range of other smaller cackles, growls, barks, and clucking noises. 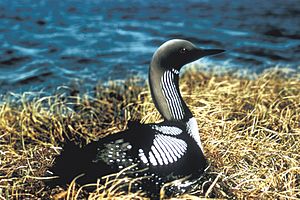 The Pacific loon breeds on tundra lakes, and winters in the open ocean or other large bodies of water. It breeds primarily in northern Canada and eastern Siberia, and winters along the Pacific coast of North America.

Unlike other loons/divers, this bird may migrate in flocks. It winters at sea, mainly on the Pacific coast, or on large lakes over a much wider range, including China, Japan, North Korea, South Korea, United States and Mexico. It has occurred as a vagrant to Greenland, Hong Kong, Great Britain, Spain, Finland and Switzerland (Dec 2015).

The Pacific loon constructs its nest on the ground near deep lakes. This nest is made out of piled-up vegetation.

This loon lays a clutch of one to two light buff or green eggs with brown spots of various sizes. These eggs typically measure 76 by 47 millimetres (3.0 by 1.9 in). Although the eggs are laid a few days a part, they can usually be seen to hatch at intervals not more than a day. Incubation lasts 23 to 25 days.

Socially monogamous Pacific loons have been found to have high territory retention rates (0.92) indicating that the loons are able to successfully defend their nesting lake from other loon pairs or individuals who may be trying to move in. Furthermore, males have a greater success at territory retention than females, but no evidence suggests that this difference is attributed to size but is rather due to fighting ability or familiarity with territory.

Pacific loons prospecting for a new lake frequently visited lakes that were already occupied, this along with high retention rates of lakes indicates that the loon population in Northern Alaska may be saturated. The Pacific loon has also been known to be very aggressive, engaging in interspecific killing of both hatch year and after hatch year individuals who intentionally or accidentally approach the loon's nesting area.

A pair of Pacific loons will defend young as a parental unit in which one parent protects the nest or fledglings while the other parent aggressively attacks the perceived threat. If the threat is another animal on the water, the attacking loon will extend its head and neck in an aggressive manner and dive under the threat in an attempt to stab it with its beak as it resurfaces. Pacific loons are so aggressive, they have even been observed displaying threatening body language towards passing airplanes in Alaska.

This species, like all divers/loons, is a specialist fish-eater, catching its prey underwater. It also forages in groups, usually swimming under schools of fish and forcing them up towards the surface. It does, although, generally feed closer to the shore than other loons.

One harmful environmental pollutant to the Pacific loon population is heavy metals like mercury, which can be observed in their habitat as a result of legacy mining in the areas the loons migrate through and hunt in. It has been shown that elevated levels of mercury in the environment poses a significant health risk to avian piscivores like the Pacific loon. Mercury is up-taken by small fish which is a primary source of food in a loon's diet. When a loon eats the fish it will incorporate the mercury from the fish into its body, which can cause adverse health effects.

Additionally, it has been shown that nest visits from researchers and capture events can have a significant impact on the survival rates within Pacific loon nests. When investigators capture Pacific loons while they are breeding or incubating eggs regardless of how close they are to the nest at the time of capture, the survival rates of the eggs decrease. This is most likely due to the fact that Pacific loons nest in a traditionally remote part of Western Alaska and are not typically accustomed to human interaction of any form. The lowered survival rate of the loon's offspring when a parent is captured or the nest is visited indicates that the population could face severe consequences from encroaching human contact.

Reports also exist of Pacific loons ingesting polluted plastic, a problem that is becoming an increasingly high concern among avians in Canada and across the globe. Luckily, the diving foraging behavior of loons keeps them at a relatively low risk of death from overconsumption of plastic, as most of the polluted debris exists floating on the surface of the water rather than in the depths.

All content from Kiddle encyclopedia articles (including the article images and facts) can be freely used under Attribution-ShareAlike license, unless stated otherwise. Cite this article:
Pacific loon Facts for Kids. Kiddle Encyclopedia.