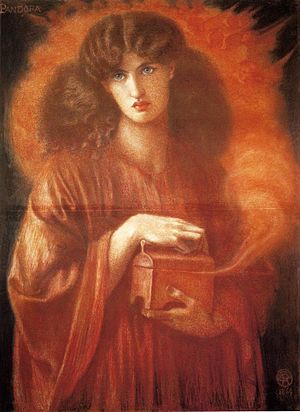 The painting by Rossetti, 1869 version.

In Greek mythology, Pandora's box was a large jar (πιθος pithos) carried by Pandora. It contained the evils to be let loose on mankind. When the box was empty, hope remained. The actual evils are not specified by Hesiod.

Where the word box is from

The word in the original text is pithos, which usually refers to a large container; used to store wine or other things. Such containers were also used for funerals. In the case of Pandora, this jar may have been made of clay for use as storage as in the usual sense, or, instead, of bronze metal as an unbreakable prison.

The mistranslation of pithos as "box" is usually attributed to the 16th century humanist Erasmus of Rotterdam. Erasums is thought to have made the error when he translated Hesiod's tale of Pandora into Latin. Hesiod's pithos refers to a storage jar for oil or grain. Erasmus, however, translated pithos into the Latin word pyxis, meaning "box". The phrase "Pandora's box" has endured ever since. This error was further backed by Dante Gabriel Rossetti's painting Pandora.

All content from Kiddle encyclopedia articles (including the article images and facts) can be freely used under Attribution-ShareAlike license, unless stated otherwise. Cite this article:
Pandora's box Facts for Kids. Kiddle Encyclopedia.